This weekend I went up to Bend to go to a wedding (which was ridiculous) and while there I decided it would be a good idea to take a tour of Deschutes Brewery. While waiting for the tour to start we sat in the tasting room and were given 4 free samples equivelant to that of about a flight. I believe they do this to facilitate learning on the tour.

After the tour started we were directed to look at the two MASSIVE silos in front of the building that contained malted barley. All the spent grain is recycled in some way whether it is in their bakery, that supplies the brew pub with buns and bread, or taken to a farmer that uses it as feed for cattle. 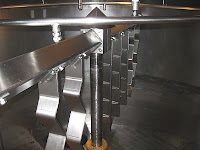 Once inside the building I see 2 gigantic tanks with the which are the tuns for the original brew house (Right: inside mashtun). Which are still in use today. The Next stop on the tour is the employee break room, where each employee gets refreshing beverages after their shift. There is a closet with rotating tap handles for employees enjoyment and to the right of this fun door is a much larger do 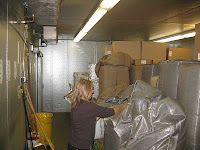 or. The next passage to Narnia is the Hop Room where hundreds and hundreds of pounds of whole leaf hops are stored preparing to be dumped in hot wort.
Deschutes Brewery uses primarily Cascade hops in their beer according to our less than helpful ditz of a tour guide. (Shown left molesting bags of hops.)

The next stop on the tour is

the huppmann room. This room is filled with possibly the most impressive pieces of industrial equipment I've ever seen. These were gigantic tanks with conical tops and not a single seam on them. No seams/welds are important in brewing equipment because bacteria can get trapped in the rough areas of the welds, causing the beer to have undesired flavors. These tanks were designed, built, and shipped from Germany to Bend. They had to close down several sections of the highway to transport the tanks to their final resting place at the brewery. (Note: The picture at the right are not of Deschutes a bunch of damn tourists were in the way.) After this we went upstairs and saw the lab and blind tasting room continuing on to the fermenting room. Pictures below: 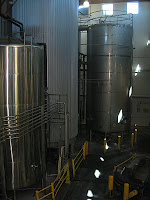 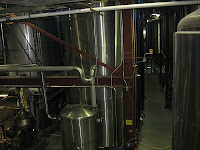 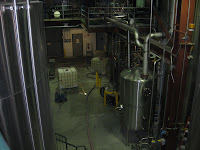 Following the fermentation room was the bottling room it seemed a little small for the thousands of bottles that get passed through those doors. After bottling upstairs we went to the office section where every Jubelale bottle design was put on the wall.
Posted by Joseph M. Cooley 2 comments: