I went to the Holiday Ale Festival last Saturday and was extremely pleased with the results. It was crowded of course but it seemed more reasonably crowded. A nice new addition to this years event was a clear plastic roof over the main bar. This didn't make the beer better but added a nice touch to the otherwise circus atmosphere.
I arrived late so I could only try a few before I had to return home for the evening. This is my review of the beers tried. As always this is only a review of how I liked them and some of their characteristics. This is not a review of how good of a beer it is or stylistically how close it adheres to BJCP guidelines. Note that as the night progresses I gradually become more intoxicated.
Brewery - Beer
Review Grade

Firestone walker - Union Barrel Fermented Porter
Very smooth strong chocolate notes (The sign for this beer had a return after barrel so fermented porter was on the next line. My friend who I went with asked me what a "Fermented Porter" was.) B+
Seven Brides Brewing - Weezin-ator
Extremely spiced, I didn't want to finish this beer when I started however my taste-buds became accustomed to it after a while and the spices mellowed out. It was much more palatable the more I drank. C
Collaborator - Aegir's Cauldron
Dark Baltic Porter, aged in bourbon barrels, for a long time...., VERY bourbon-y nice thick malt flavor B-
Lucky Labrador Brewing- Pavlov's Russian imperial stout
I didn't have a reason that I didn't like this beer. I usually love a good stout but I have no idea why this one did not make me want to drink lots of it. C+
Bridgeport Brewing Company- Old Knucklehead Barley Wine
Possibly the worst beer I had the whole evening. The process to get to this beverage was as obnoxious as the beer itself. The bar containing this treat was the one upstairs with only a handful of beers on tap. When I walked into the tent there was a crowd of obnoxious Oregon fans Screaming "OOOOOOO" so that was a blast. Then we had to wait in collective line that everyone who wanted beer from those few taps had to wait in and then distribute at the last second. Enough about ambiance... the first thing I though when I took my first sip was bubblegum, an obnoxiously strong flavor of bubblegum I couldn't get it off my tongue. When consulting others on the aroma that most defined this beer it was the same as mine. Maybe a bad keg maybe that's how it was supposed to taste. Either way I didn't like it at all. D

(I did however meet Santa Clause on this trip. Who assured me he was the real Santa and that he did not work for ol' Chris Kringle. I'm pretty sure he was telling the truth because of the conversation we had after. His response made me forget about my bubblegum barley wine. (Paraphrased but not embellished)

Me: So have people been asking you for gifts all night? 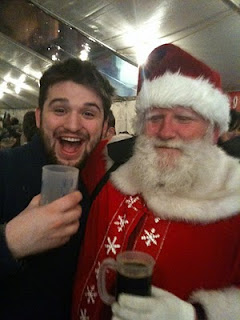 Santa: Yeah the misses at the north pole is always on my case I have to slip down here to get out of the workshop and let loose every once in a while. I told that her that I was at a charity event for kids. The real reason I'm here tonight is that the girls love the santa outfit.
Me: So do they sit on your lap when asking you for their Christmas presents?
Santa: (Devilish grin) Yeah the Santa outfit really helps with the ladies.
Me: They like the beard too I'll bet. (pointing at my pathetic attempt at a yule-tide facial hair)
Santa: Well you're going to have to work a little harder on yours to get the ladies (Stroking his beard)

I don't know if this was the REAL Santa or not but he made me believe in Christmas miracles. Whoever you are, mysterious bearded saint, thank you for your wizened outlook on life and the dating tips.
Cascade brewing - Sang Noir
Pretty sour did not expect such a sour flavor to come from this dark of a beer, I thought sensed a slight bourbon aroma does not come through on taste much. strong fruit taste I usually dont like sour beers that much but this one seemed like I could drink more. B-
Block 15 Restaurant and Brewery- Figgy Pudding Olde Stock
Spiced and Malty Sweet kind of a bourbon taste not exactly though hard to describe. C

At this point I am getting pretty drunk and even make a note of it. Also I dont know if its my imagination but everything had been tasting or smelling like it was bourbon barrel aged.
Colombia River Brewing Co- Paddler's Porter
Very Good! Huge chocolate undertones, very smooth with a slight vanilla taste. Minor burnt aftertaste. The best beer I had all night. It's kind of a shame I wish I would have had this earlier in the night so I could have given a better review. A
Coalition Brewing - Lost Glove
Very sweet aroma, mild hoppiness, not overly malty though just very sweet like unfermentable sugars, The hops comes through. I thought it had a thinner mouthfeel for how malty it was. B-
Lagugunitas Brewing Co.- Brown Mashuggana
I am pretty sure this was not a good beer, but don't quote me on that. At this point I was far too intoxicated to properly give this beer a chance. I
Posted by Joseph M. Cooley No comments: