While at New Seasons Market grabbing lunch on Friday I was perusing the beer selection while my wok was... woking(?) and came across a 6 pack of Churchkey Pilsner from Churchkey Can Company.  This beer has been getting a lot of press lately because of its kitschy throwback can design.  This beer company was the brain child of former Nike designer Justin Hawkins and former Entourage actor Adrian Grenier.  I decided that since I have heard it was a decent beer, despite its obvious marketing gimmicks, I would try it.
The $9.99 price tag was a little steep for a 4.9% pilsner beer but I thought I'd give it a try.  The first thing I noticed was the packaging, rectangular cardboard tube with two open ends.  Grabbing the beer tunnel I noticed that almost every can was dented, about 2 seconds after picking it up I discovered why.  This box, while very cool looking, is essentially useless for transporting beer cans with any success. 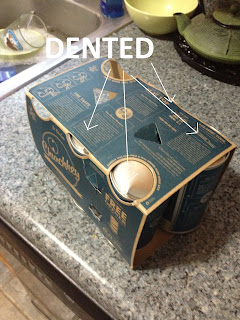 Two cans fell out of one end causing an immediate imbalance on the other side forcing it to tip and dump the two beers out of the other end.  Because of the two finger holes, I was able to maintain my grasp of the middle two.  So as I stood in the middle of New Seasons beer isle with beer strewn around me I hoped nobody would see the mess I made, or what I was about to do.  I quickly returned the cans to their holster and promptly walked away.... I didn't.  I looked on the shelves for a 6 pack that hadn't been dropped because I didn't want dented cans.  Now I know what you're thinking, what so some other guy can get dented cans?  Yes.  But karma being the bitch it is when I went in search of this perfect untainted 6-pack there was none to be found.  I pulled the 5 different boxes out and to my dismay each one was just as dented if not more than mine.  Either I wasn't the only one with this problem or they come that way, "Pre-Stressed," like jeans from Abercrombie & Fitch.
Each 6-pack comes with an attached churchkey that is barely functional  perhaps it is my in-experience with using antiquated technologies but I found it much harder to open than I though it would be.  This could also have been because the can was dented.
I was really hoping that I would like this beer and there is nothing truly bad about it I ranked it a 2 star on UNTAPPD.  The first beer I had was out of the can so I could drink it and look cool while doing it. This pilsner has a very light and crisp flavor and goes down very smooth, the problem comes on the back end.  The aftertaste of this beer tasted tannic.  I am hesitant to say it tasted metallic because this review will be immediately dismissed, but it was kind of metallic.  I thought it might be an issue that I was drinking it from the can so for the second one I poured it into a glass so I could fully experience it, as beer is meant to be drank, in a glass. The flavor profile did not change. 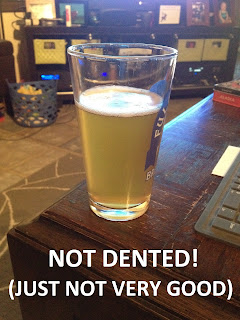 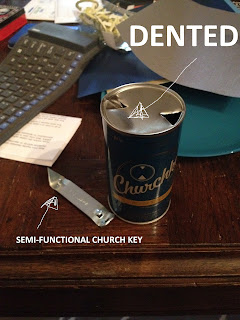 The one thing that I will forever be thankful that this beer brought to my attention is the two hole method of drinking beer.  Miller Lite is releasing something similar to this with a second hole that can be punched.  This second hole is there so the beer doesn't glug when you drink it from the can.  I know this seems like a marketing gimmick just as much as the retro cans of churchkey beer company. However,  I actually enjoyed drinking it out of the can more with the second hole punched in it.  I will have to test this at a later date with a standard can but I think I may carry a churchkey with me when on drinking outings from now on.  I would almost say that was the most enjoyable thing about this beer was how smoothly it flowed from the can while drinking. 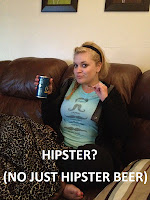 This beer was meant for a very specific crowd, and yes I am talking about the hipsters.  Purposefully making things more difficult in order to seem like a trend setter or better than others is their mantra.  This beer is currently only availale in Seattle and Portland areas, arguably the hipster Mecca.  Whitney was wearing moustache necklace and a moustache t shirt and the thing that made her the most hipster-like was that she was drinking a beer with turn of the century technology.  If you go to the Wikipedia page for this beer the photo (as seen a the top of this article) is an "instagram" style photo another classic hipster merit badge, right up there with double decker bikes, ironic moustaches, and now churchkey beer.