Day two of beer fest I had to go to work in the morning, but we got to take the max to the beerfest at 2. I got down there around 3:30 and I remembered why I take Thursday off to go to the beer fest. The lines were much longer than on Thursday, and there was a lot of dust in the air from the stomped grass, overall a less enjoyable experience. I started off at the north tent trying to get all the beers checked off the list. I had a pretty good idea that I wasn't going to be able to get them all with the lines here.

Old Market Pub & Brewery - Dilution of Grandeur - Mixed Berry Belgian Lambic - 8.1 B+ This beer has a Reddish pink color with a pleasant fruity aroma.  The first drink I liked this beer, The sour dark berry flavor comes through pretty strong and then finishes light and crisp.  A very drinkable beer, maybe one of the most drinkable sours.  Not a super sour beer like something really heavily inocculated with pedio or lacto from Cascade Brewing but just enough to get a tart flavor.

Lompoc Brewing - EleventyOne CDA - Cascadian Dark Ale - 6.6 B+ A very dark beer that can be seen through if held up to the light.  The toasted roasty aroma that is followed up by a hoppy and dark roasted flavor that was very drinkable.

Widmer Brothers Brewing Co. - Eye of the Thaiger - Thai Lager - 5.2 C Super clear straw colored beer has a lightly spiced nose.  Some spiced taste that I could not distinguish, maybe sage or ginger. I probably wouldn't want to drink more than a full beer of this.

Seven Brides Brewing - Frankenlou’s IPA - IPA - 7.0 C Dark copper in color with a musky almost moldy aroma.  This was bitter and not really in a good way, an unpleasant aftertaste.  This medium bodied beer was really not drinkable.

McMenamins Cornelius Pass Roadhouse - Silvercone IPL - India Pale Lager - 6.5 B A golden beer, what I would call the definition of golden, has a very piney aroma and then followed up by a pleasant pine flavor and a clean finishing aftertaste.  A medium to light body beer.  This was a very good drinkable beer no unpleasant lingering aftertaste. 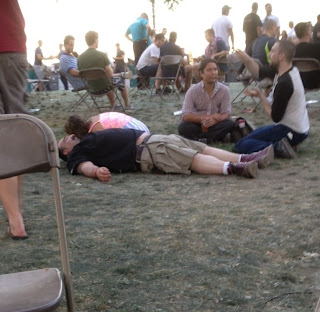 We went to go hang out at the north end of the brewfest where there was not so many people.  I'm glad that I did because I was able to witness this sight.  While looking for an open space we saw an ample man lying on the ground.  This guy was a real treat. When we first walked by him he was sitting up with his kilt just hanging out talking with some friends.  He caught my attention because he has an amazing handlebar mustache.  He must have been tired because he had to lay down and take a little nap.  When he was laying down his belly forced his shirt up to reveal a very large gut and what amounted to a sizable hand cannon in a holster tucked into his kilt.  After he had laid there for a bit his legs must have got restless because he decided to lift one of his knees up to reveal what appeared to be the ass crack equivalent of a handlebar mustache.  We hung out here for a while and then decided to go get some more beer.

Boulder Beer Co - Pump up the Jam - Fruit Beer - 5.2 C+ This cloudy tan beer had a minty slightly licorice aroma, Whitney said that it smelled like Jaegermeister.  The taste was like a light red berry and was thin it needed a lot more body.  It was technically drinkable and not filling at all but not a great beer.

Rogue Brewery - Beard Beer - Belgian-Golden - 5.6 C- This clear blonde ale has a light fruit and spice smell that transitions into a clovey taste when drank. A light bodied beer that i could probably drink but I'm not a big Belgian fan.

Ballast Point Brewing Co. - Sculpin IPA - American-Style India Pale Ale - 6.6 A I've had this beer before but it was last call and i didn't want to get a beer that I didn't like for the last one and I only had 4 tokens left and the taps were about to close.  A clear golden beer with a piney aroma and flavor is spectacular.  This is a medium bodied beer is just a real pleasure to drink.  This was a great final beer to have it made the night finish on a good note.