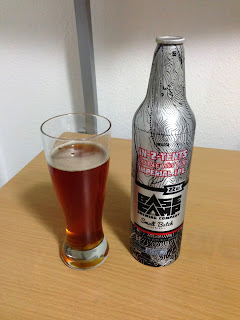 Brewery: Base Camp Brewing Company
Beer:  In-2-Tents Double Wet Hop Imperial IPL
Style: Imperial India Pale Lager
ABV: 7.7%
Basecamp brewing had no information on this beer on their website, perhaps because it is part of a new "small batch" series as indicated by the bottle... can... whatever.  After some digging I found some website claiming it uses both Centennial and Meridian hops.  In what order, and which was wet hopped is a mystery. The bottle also indicates you should "Soak in a mountain river.
Chill in the snow. Cool off in a lake. Refrigerate if you have to." Kind of a cool marketing campaign for such an outdoorsy beer company.  The 22 oz. bottle is made of aluminum so you can take it hiking or camping or whatever other outdoor activity you like.

A:  The first thing I notice about this beer when poured into my "micro-weizen" glass is the beautiful cream colored and densely frothy head.  Unfortunately it is gone before I can even snap a picture of it. Once I pick myself up off the floor and recompose after the loss of something so beautiful I start to move down the bodacious curves of the glass.  I finally begin to admire the attractive, lightly hazy, deep orange colored beer.  When swirled a small cascade of tiny bubbles fall like snow against the glass, returning to the beer leaving behind only minimal lacing.

S: A sweet, malty aroma with with a very present backbone of grapefruit and pine. From memory similar to the non-imperial version of this beer but with a more malty profile.
T: The first taste is overwhelming with vegetal wet hop flavor, in a bad way.  I let the beer sit there and think about how it wants to greet me for a second and then try again.  This time much more pleasant.  You can definitely observe the wet hop character but once the initial shock is over it is quite pleasant.

M:  A medium mouth feel with a creamy body and light carbonation.  Very easy to drink while not feeling like a light beer.

O: Overall a great beer, the standard In-Tents IPL is a fantastic beer and this is a similar but improved version of it.  The additional alcohol is not noticeable enough to comment on although I think this has a lot more malt character than the standard.
Posted by Joseph M. Cooley