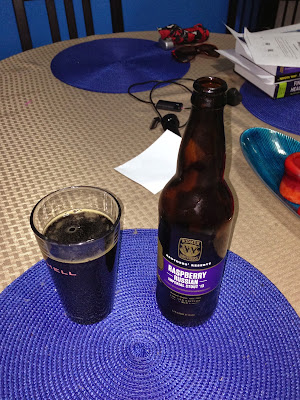 Part of the Brothers Reserve series, this beer was a gift from a friend.  I Poured  into a pint glass and immediately realized that I need to have some better glassware if I am going to start doing reviews.  This beer had a dark brown foamy head on top of the incredibly dark brown beer.  Not black but you wouldn't be able to tell unless held up to a light.  The smell is roasted chocolate and raspberry that favors the raspberry as the beer level goes down.  A sweet and upfront chocolate flavor with a background of raspberry is pleasant although not incredibly complex.  This beer has a light to moderate alcohol flavor its not a major detractor but it is definitely present, as you would expect with a 9.3% beer.  The longer I drank this beer the more that the raspberry was present in both aroma and flavor. A full bodied beer with a bit of alcohol burn, again not overbearing but it is present.  Overall a pretty good beer I would probably not drink it again but only because I know the Brothers Reserve beers are around $10 for a 22 oz bottle.

As you can see I am going to start to review beers on the site whenever I have new, unique, rare... to be honest I'll probably just end up doing them when I have time and I remember.  If you have any suggestions on the format or content please leave a comment below.
Posted by Joseph M. Cooley