I have seen this video floating around the internet, and posted on various Facebook pages for the last few weeks and I wanted to comment on it.

This video shows a bunch of pretentious hipsters ordering beers with ridiculous names like "Baby Dick Belgian White" and "Pompous A**hole" poking fun at how some breweries have got creative with beer names.  Some classic examples are Stone Brewing's "Arrogant Bastard" or Firestone Walker's "Velvet Merkin".

I understand the this video was supposed to be funny but it brings up a larger problem I have seen develop in the craft brew scene.  Craft beer has increasingly become associated with hipsters and a certain snootiness around beer knowledge.   This video is more of an indictment of beer snobs than hipsters.  Actually, its an indictment of a subsection of beer-snobs that are also hipsters. 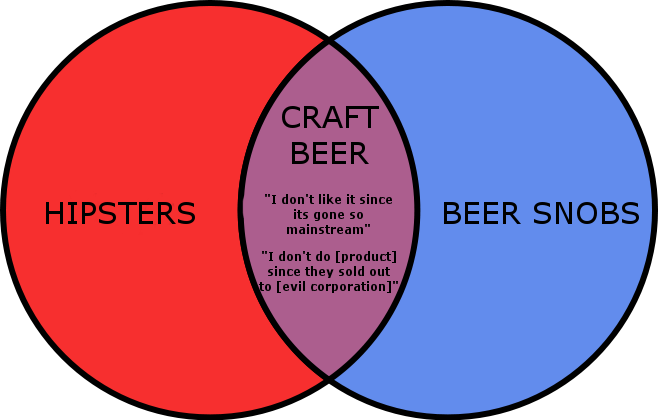 Hipsters and beers snobs do have some similarities they both proclaim their preference for things before their introduction to "the mainstream".  Also, both have been know to publicly denounce a product simply because of its ownership (i.e. Goose Island being purchased by Anheuser-Busch.)

However, their main characteristics remain very different. Hipsters usually spend their time pining over heirloom tomatoes, irony, and fixed gear bicycles. Whereas a beer snob will go on diatribes about drinking from the wrong glassware, their latest "drain pour" and judging others for enjoying a beer they have deemed unworthy.

So go out, be knowledgeable about your beer, drink what you like and above all else, don't act like a pompous asshole.
Posted by Joseph M. Cooley