The Black Out Beer Fest was held this last Friday February 21st throughout the Lompoc Brewery. Almost every inch of the brewery was open for festival goers to explore and drink.  The Sidebar was pouring six beers, an impromptu bar set up between conical ferementers was pouring a couple in the brewery, and there was a tent outside with another seven beers accompanied by live music.  Being able to walk around the actual brewery floor and look at the equipment really added a nice ambiance to the event.
Lompoc brewery does not have a huge footprint so this may have just been out of necessity rather than ambiance.  The venue got very crowded as the evening progressed but not to the point that you couldn't walk.  The beer selection was very good, and the souvenir glass was also great.  An actual glass mug with the brewery logo and beer-fest title stenciled on its face. 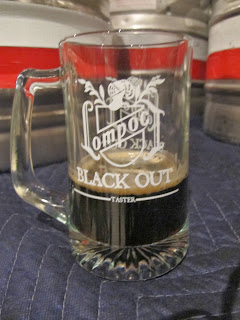 Breakside Brewing - Salted Caramel Stout - 6.7% ABV
A collaboration with Salt and Straw ice cream shop in Portland.  The base is a stout with sea salt and caramel added to the wort before fermentation.

A: Sparse and diminishing dark tan head on a black beer.
S:  Sweet smell of cookie, molasses and caramel with a toasted character.
T: A lot of bitterness from the malts and a light coffee note.
M: A full bodied beer with a slightly gritty texture, lively carbonation and  a mildly chalky finish.
O: I didn't taste the salt at all and there was only a slight caramel sweetness. 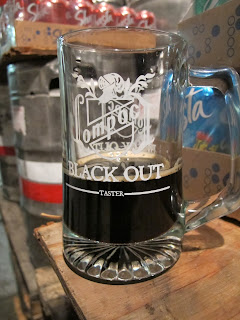 A: A very small creamy head rests on a deep black beer.
S: Sweet with roasted and toffee notes.
T: Deep roasted malt flavor, that lingers on your pallet after drank.
M: Full bodied with a a thick silky texture and average carbonation . This beer finished very dry and clean.
O:  Good beer, roasted toffee is a good summation of the beer. 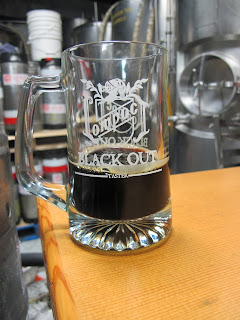 A: Small brown creamy head covering the opaque black beer.
S: Red wine and oak hits you in your nose like a wooden wine-o telling you a story too close to your face.
T: Extremely complex combination of oak, red wine, molasses and raisin.
M: A full bodied beer with a moderate alcohol tinge.
O: The triple barrel aging definitely give this beer an incredibly complex character.  Bold oak and red wine permeate this beer throughout. Very good beer, unlike anything else I had at this festival. 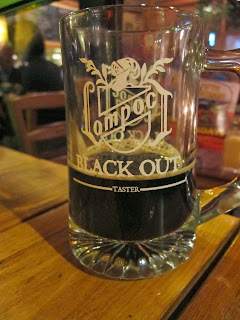 The Commons Brewery - Boysen - 10% ABV
An imperial Belgian porter that has had boysenberries added during fermentation.
A: A unique deep purple beer, whose color can only be seen when held up to the light supports a small creamy, lasting head.
S: This beer smells like boysenberry juice almost no malt character comes through being masked by the very potent, slightly sour, berry aroma.
T: A little more malt character develops when drank.  A slightly sweet beer has a very strong sour boysenberry notes.  Strong berry like the aroma but turned down a little by the toasted malt profile.
M: Medium mouthfeel with a relatively tart finish.
O: Very unique, the pairing of the sour berry flavor with the toasted malts gives this beer a pleasant and unique flavor. 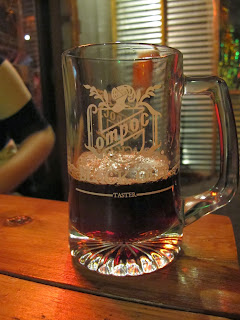 A: Clear root beer colored beverage and by far the lightest I had all night with a bubbly lasting head.
S: A toasted aroma with hints of chocolate and molasses. The malts supported a bold resiny hop aroma.
T: Definitely an CDA this beer is very hoppy, the dank resiny hops give this beer a great hop flavor to balance the malts.
M: A medium bodied beer with a thin texture and average carbonation finishes with a slight lingering bitterness.
O: A nice change from the roasted and toasted malt forward beers I have had up to this point.  Still a noticeable toasted malt character but very hop forward. 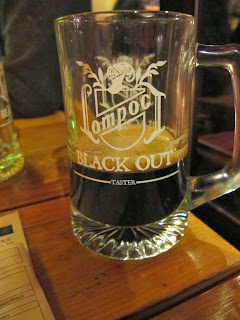 A: A small but dense creamy brown head tops this murky black beer.
S: Dark chocolate and a slight smoke and soy sauce scent dulled by the hot alcohol aroma.
T: Not as smokey as I was expecting but definitely as alcoholic as I was expecting.  A beer of 9.8% is pretty difficult to mask the alcohol.
M: Heavy bodied beer with a at thick texture and a harsh alcohol finish.
O: Very boozy beer that's almost all that I got from it was a slightly smokey stout that tasted like alcohol. 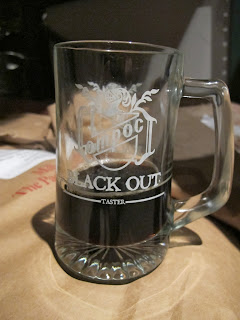 Lucky Lab Brewing - Wheat Stout - 5.8% ABV
Not originally on the docket but was put on tap when one of the other kegs was blown.
A: A sparse and fleeting head sit on a very dark root beer, almost black colored beer.
S: A very present bread-y and molasses character effervesce out of the glass.
T: Like if you put a piece of Dave's Killer Wheat bread in the toaster for too long.
M: Medium bodied with a thick texture and a smooth clean finish.
O: Pretty good, you can really taste the wheat, the grain bill is composed of 48% wheat which may contribute to that. 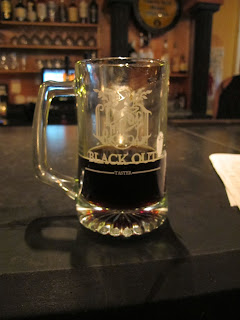 Lompoc Brewing - Sour Stout - 4.5% ABV
A: Almost no head sits on this clear black beer.
S: Sour grape and acidic this beer ejects aerial tartness into your nostrils
T: While there is a non neglected roasted flavor this beer is all about the acidic sourness and a noticeable grape flavor.
M: A medium bodied beer with a silky texture and soft carbonation finishes very tart.
O: This was going to be my last beer of the night but I decided to have one more since I didn't want to leave this beer fest with a "sour taste in my mouth."  A good beer though. 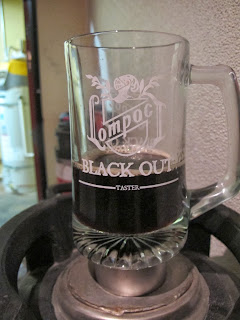 A: A sparse dark brown head on a deep black beer.
S: This beers smells of nutty chocolate notes with cookie dough, vanilla and bourbon. These aromas are all present but the overriding smell coming off this beer is the woody oak aroma.
T: Tastes like malty cookie dough with a light bourbon flavor.  Great!
M: Medium bodied with a soft carbonation,smooth finish and heavy alcohol character.
O: Really great beer to finish the night with.
Posted by Joseph M. Cooley