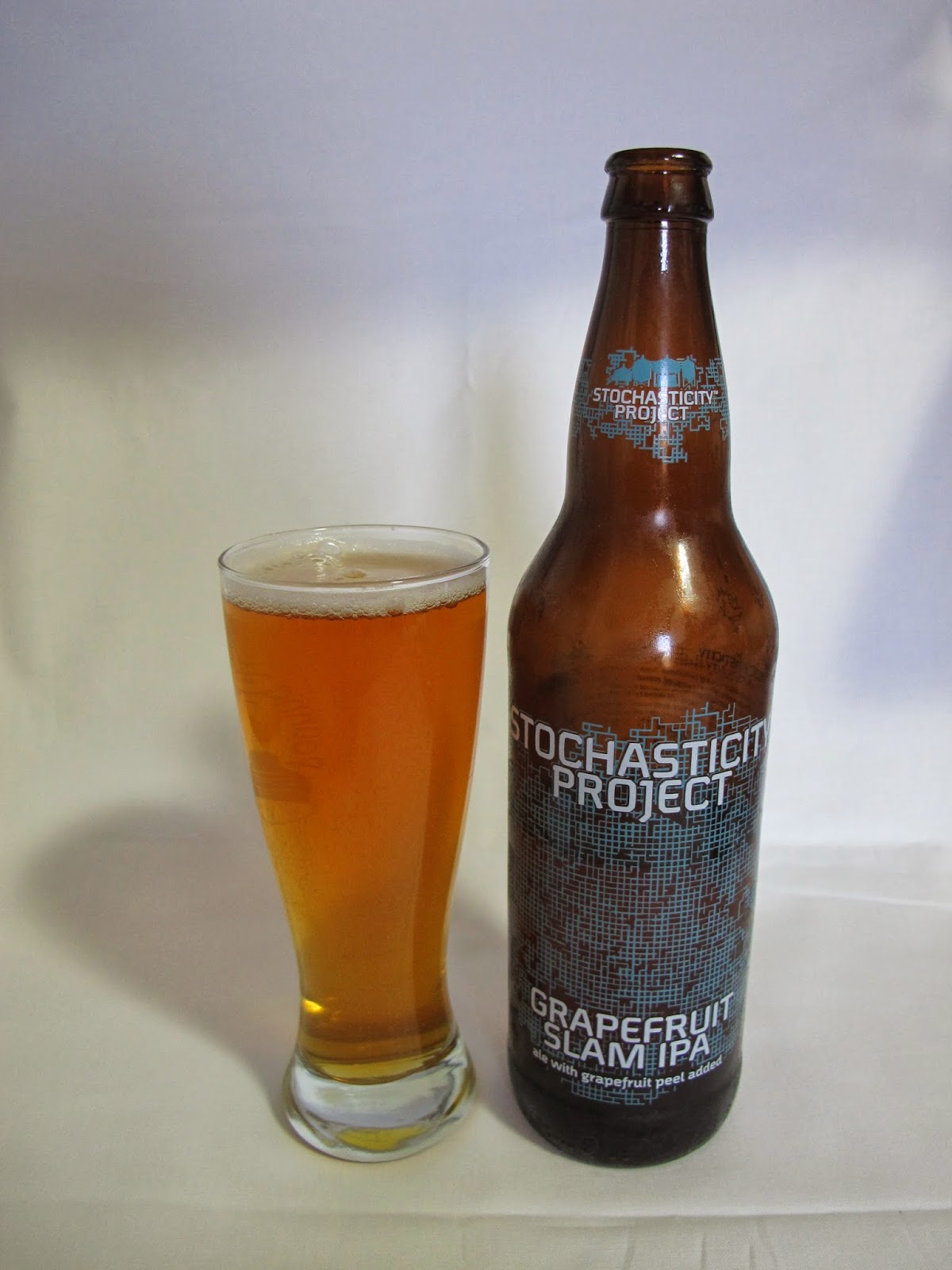 Brewery: Stochasticity Project / Koochenvagner's Brewing Co. / Stone Brewing Co.
Location: Escondido, CA
Beer: Grapefruit Slam IPA
Style: Imperial/Double IPA
Serving: Weizen Glass (22 oz.)
ABV: 8.2%
IBUs: 95
This beer is a riddle wrapped in an enigma.  On the bottle it says "Brewed and Bottled  by Koochenvagner's Brewing Co." This beer is clearly brewed by Stone though it doesn't actually say stone anywhere on the bottle.  The image below Stochasticity project is like one of those magic eyes and if you look at it long enough you can see the gargoyle appear.  When I visited stochasticity.com it is finally revealed this is a Stone beer.  From what I could gather Stochasticity is Stones pet project where they will be trying experimental beer and one offs that they do not want to put out under the Stone name.

The back of the bottle reveals this was brewed with Centennial, Chinook and Magnum hops and dry hopped with Centennial. Grapefruit peel was added as a specialty ingredient to lend to this beers citrus persona. The grain bill is pretty simple with only North American Pale and Light Crystal but you are not looking for a complex malt profile in an IPA just something to balance against the hops.  There is also a confusing, and heavily marketing influenced commercial for the beer as well:
A (3/3): A light golden clear ale with a small off white creamy head that remains covering the beer for the majority of the time.

S (8/12): The aroma isn't aggressive but is present; orange and lime but suprisingly not a lot of grapefruit character.  I definitely do not get the SLAM of grapefruit that is promised on the bottle.  A light bready malt smell can be detected but not an overly aromatic beer.

T (14/20): Definitely contains citrus notes but not deserving of the slam name, also not distinctively grapefruit.  Really the only definitive character I can get from the grapefruit is the bitterness from the peel.  The pithy white layer underneath the zest that remains bitter and is difficult to cleanse from your palate. Definitely a more biting bitterness that lingers with your long after drank.

M (3/5): A medium bodied beer with a thicker texture and medium carbonation.  This beer finishes with a lingering bitterness that does not go away.

O (6/10): An decent beer but I just couldn't get over the bitterness from the grapefruit peel.  If it was just there momentarily it would be fine however the amount of time that it stayed really detracted from the overall enjoyment of this beer.  I am excited to try the next beer from Stone Stochsticity.  According the the website the next one is Varna Necropolis which is a hoppy Belgian style golden strong ale that has been aged in bourbon whiskey barrels.