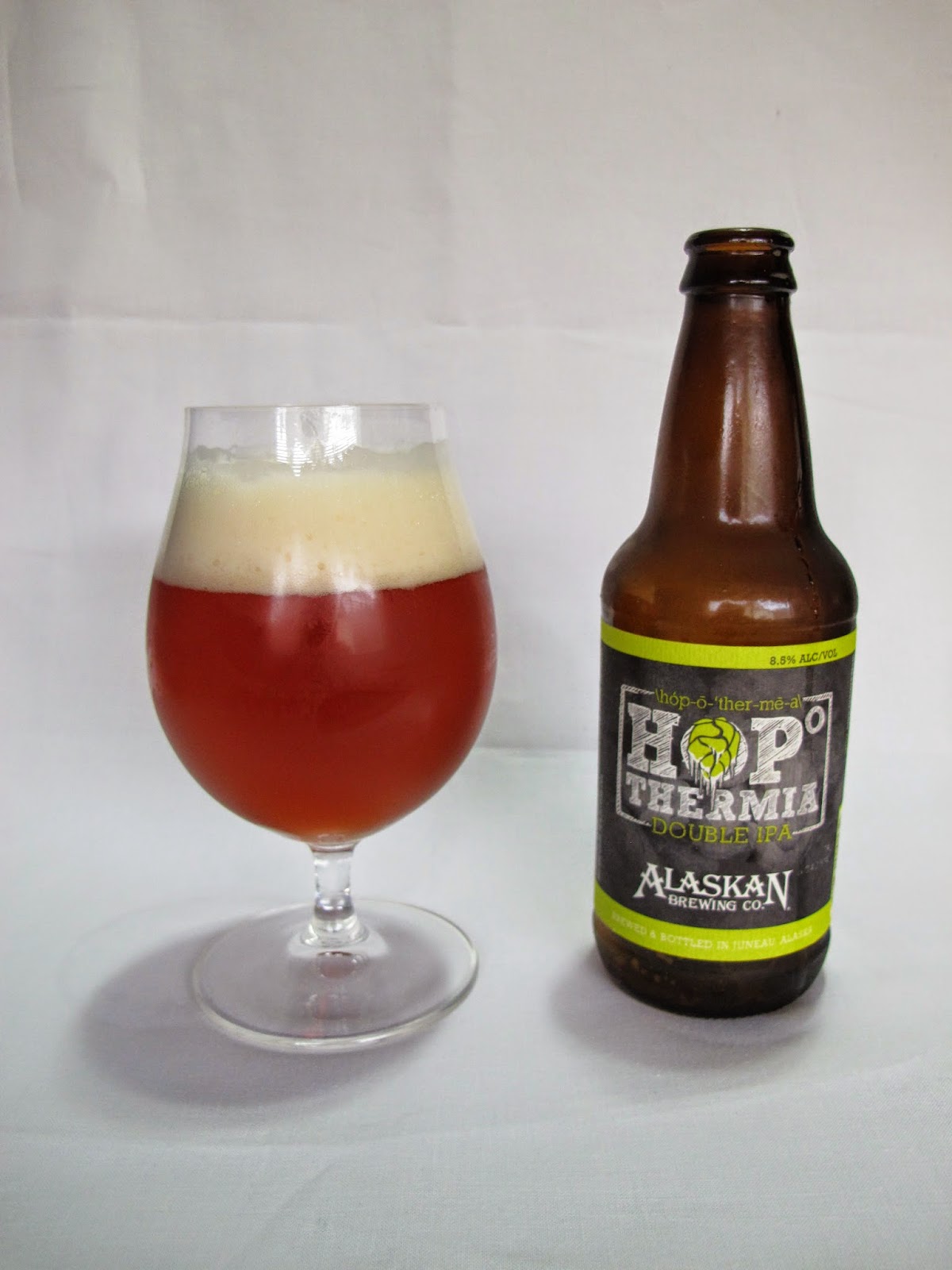 Brewery: Alaskan Brewing Company
Location: Juneau, AK
Beer: Hopothermia
Style: American Double IPA
Serving: Snifter Glass (22 oz.)
ABV: 8.5%
IBUs: 70
A fun fact I did not know about the largest brewery in my home state is that their sole fuel source for the brewing process is dried spent grain.  Alaskan Brewing calls this process "Beer Powered Beer."  This process is accomplished by taking the spent grain, pressing the water out, placing it in a dryer and then burning it to create steam for their brewing vessels.

Hopthermia is bittered with Nugget and Apollo hops, followed up with Amarillo, Citra and Centennial Hops in the later additions to compliment the two-row and specialty malt profile.

A (*/3): This beer pours with almost no head and devolves into a miniature Aleutian Island chain of bubbles clumping on the surface. I think orange-ish copper is the best way to describe the color of this transparent beer.  Because of the lack of head there was no lacing to speak of. There may have been something wrong with this batch because every picture I have seen show this beer with a big frothy head.  I started to do a hard pour after I saw it was not producing any bubbles, but it did not add anything.

A 2.0 (3/3) After the disappointing head and because I had more that came in my 4-pack I had another bottle and the pour was much nicer.  The retention was still not anything to talk about but at least there was something to start off with.  This produced a moderate amount of lacing and the beer remained the same orang-ish copper color.

S (8/12): Light orange and spicy grapefruit along with tropical fruit hop aromatics overflow the glass while a bready, with a hint of sweetness balance the malt notes.  The slightest hint of alcohol can be detected but not a detractor in any way.

T (17/20): This beer has spicy grapefruit notes with some earthy hop undertones.  The malt flavor is just enough to even out the hops without taking anything away from them.  Also, a pleasant bitterness hangs on your tongue but just long enough so it does not overstay its welcome.

M (5/5): A light bodied beer with a medium level of carbonation and a crisp, bright mouthfeel, finishes off clean.

O (8/10): A great beer, was recommended to me by both my Brother and Dad who live in Wasilla, AK.  Very easy to drink and does not overwhelm you with the 8.5% alcohol.