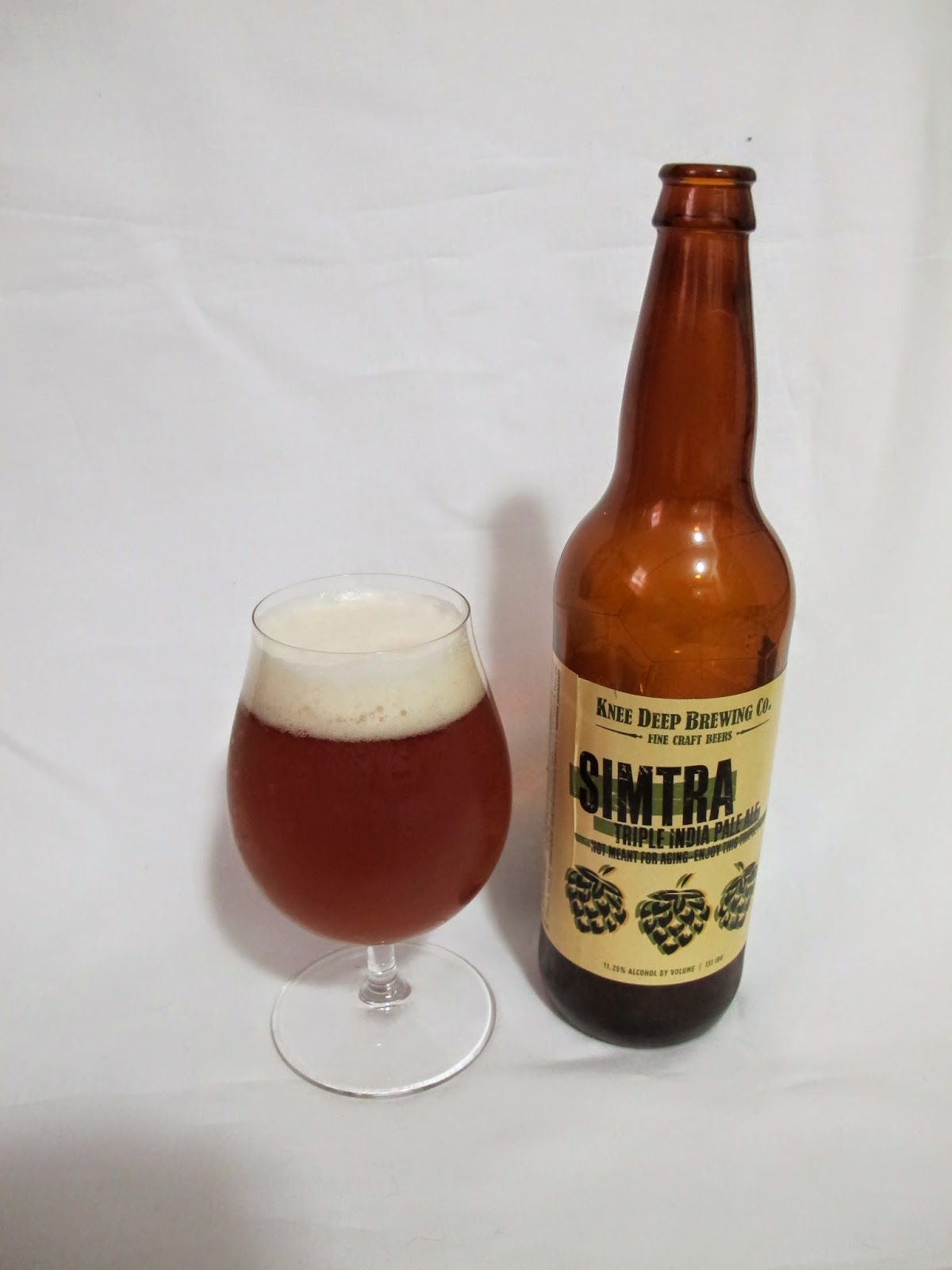 Brewery: Kneed Deep Brewing Co.
Location: Auburn, CA
Beer: Simtra Triple India Pale Ale
Style: Triple IPA
Serving: Snifter Glass (22 oz.)
Bottled: 2/19/14
ABV: 11.25%
IBUs: 120+
Emblazoned on the bottle is "Not meant for aging enjoy this triple fresh" proclaiming the IPA aficionados mantra, drink it fast. This being said I should have probably drank this beer a little quicker than I did, still 2 months probably isn't enough to change the flavor too much.

A (3/3): A couple fingers of creamy pale yellow head blanket this cloudy amber ale.  Much darker than I was expecting and definitely not typical of this style.

S (11/12): A bountiful bouquet of rich citrus and dank resinous hop notes flourish from this beers surface.  The aroma is given life by the amazing hops that give this beer its portmanteau name, Simcoe and Citra. Some alcohol aromatics can be uncovered but not even approaching that of a barley wine of similar alcohol content.

T (20/20): A linebacker hop flavor chest bumps your tongue with its piney, light lemon and grapefruit manliness. Like any amazing IPA the malt character is noticeable but takes a supporting role to the gratuitous hop flavor.

M (4/5): The first sip is incredibly light and airy.  A hint of citrus pith but just barely.  If you try hard you can unearth the alcohol character.  This beer allows your sobriety to unsuspectingly get out of its 1991 Chevy Lumina and coyly walk up to the house, only to be greeted by Chris "11.25%" Hanson. Never saw it coming! Finishes very clean and dry with a minuscule lingering hoppiness, fantastic beer.

O (9/10): "BOLD MOVE" This beer took a big swing and it payed off.  An incredible technical achievement to cram this much hop aroma and flavor into a beer that strolls by the 11% ABV mark without blinking.  Not a particularly original choice of hops, but with the fantastic execution make this beer an incredible beer.

Outro:  I honestly think this is one of the best beers I have ever had. "I'm not just saying this because I'm drunk, but, I love you man."  This beer is fantastic, every portion of this beer is fantastic.  The smell and taste are incredible and it is still incredbily drinkable while maintaining an ass kicking 11.25%. Unfortunately, it is easier to get Pliny the Elder in Oregon than this beer, along with the $9.50 price tag I do not think I will be quaffing too many of these beers in the future.  However, my next trip to California I am definitely picking up another one.