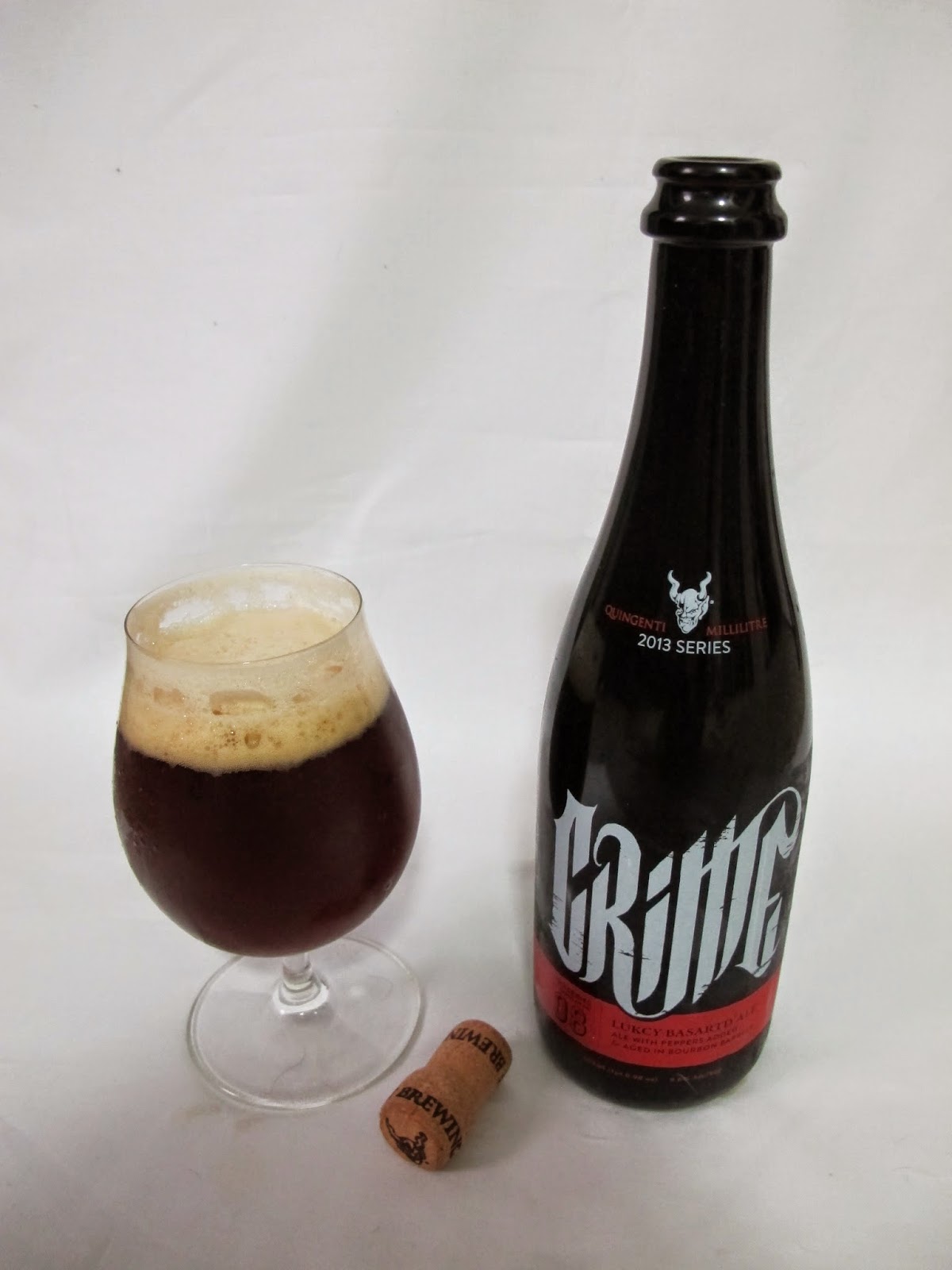 Q: “What do you call it when Greg takes his entire harvest bounty of chili pepper varieties from his own personal garden, take half of them and add to…and thus ruin…an otherwise beautiful oak barrel of Double Dry Hopped Lukcy Basartd Ale?”
A: “A Crime!”

A (3/3): Murky, dark brown  with dingy yellow head that moves in and sets up shop on top of the beer.  Pretty decent lacing coats the glass I couldn't really drink it fast enough to gauge how long it stayed around though.

S (8/12): The smell is aggressively pepper-y,  I have smelled hot sauces that gives off less hot pepper aroma than this beer.  There is a slightly oaked aroma followed by a nominal malt sweetness but for the most part this is a pepper beer.

T (12/20): Actually, not as hot as I was expecting; during the beginning of this sentence.  The first drink is a little milder than the Stone slow-mo reaction videos lead you to believe (below), but it definitely catches up to you after a couple seconds.
I really like spicy foods, so to say that this beer was not too hot is not saying much.  For a lot of people this beer would be a drain pour, simply based on its Scoville rating.  I however started out really liking this beer because of its spice. The flavor definitely has some oak aged character along with a slight smokiness that starts off really nice. However, after about 1/2 of the bottle the novelty wore off and the spiciness was all that I could taste in the beer.

M (2/5): It is difficult to properly characterize the body of this beer when so much of the mouth feel is a burning sensation.  I would say medium bodied with a... I don't really know how would you describe drinking really watery hot sauce?

O (4/10): When pouring this beer I was a little overzealous and it began to overflow my glass.  So like any experienced drinker would do I quickly went to drink the foam before it overflowed.  I managed to keep most of it from overflowing but I got trial by fire introduction to this beer.  I actually said out-loud to my dog "Shit that is a hot beer!" He didn't really seem to care as he licked up the foam that had fallen onto the carpet.  I definitely didn't hate or regret drinking this beer.  That being said, I would probably not buy another bottle for 20$ but absolutely worth a try.

UP NEXT:  I review the second half of this fiery beer duo "Punishment."
Posted by Joseph M. Cooley