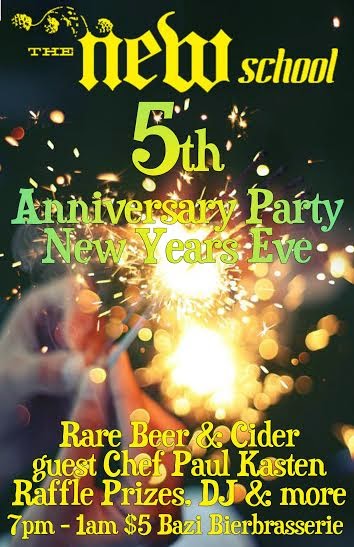 The Portland based beer and cider webmag The New School is celebrating their 5th anniversary this New Years Eve with a party at Bazi Bierbrasserie.  There bevrage list will include 10 rare beers and ciders, raffle prizes and food from acclaimed beer Chef Paul Kasten (formerly of Wildwood). This years party will be a charity benefit for Guide Dogs for the Blind.

Tickets can be purchased in advance through Paypal for only $5 and includes a buffet style dish from Chef Paul Kasten:

Pork Collar braised in wort and sliced into portions, served over roasted winter veggies simmered in the pork braising liquid, and fried sage.

Raffle Tickets will be on sale for $2 with multiple chances to win everything from Double Mountain Kriek t-shirts, Allagash Brewing Hat, Portland Beer Week shirts and even the new book "Oregon Breweries" by Brian Yaeger, bottles of Barley Browns Chaos (limited to 666 bottles), the 2015 Oregon Beer Calendar, a coupon for one of the first Growler Works uKeg's and even a New Belgium Cruiser bicycle.

Lompoc - Mon Cheri
This Belgian style golden ale was brewed with the Ardennes yeast strain giving off a mild fruitiness and finishing with a coriander spiciness. 5.5% ABV

Oakshire Brewing - Hellshire IV
The breweries fourth entry into the Hellshire series is a blend of 3 different beers matured in bourbon and brandy barrels. Oakshire's Very Ill Tempered Gnome was the base beer and after aging and blending the final product is akin to an Old Ale or Barleywine. 10.3% ABV

Upright Brewing - Spollen Angel
A Belgian-style tripel – a fitting style to pay tribute to one of our favorite brewers, Chris Spollen. The crew here met him during his days at Amnesia up the street from us, but he’s played a big part in making Oregon beer great for much longer. More important than his contributions to the brewing community is Chris’ special personality that makes him a true blast to crush a couple beers with. The Spollen Angel is one we think he’d enjoy sharing – with a big spicy nose and well integrated layers of malt, hops, and yeast notes. 9.4%

This should be a great event and opportunity to support a good cause with a chance to try some rare and exclusive beers.
Posted by Joseph M. Cooley No comments: 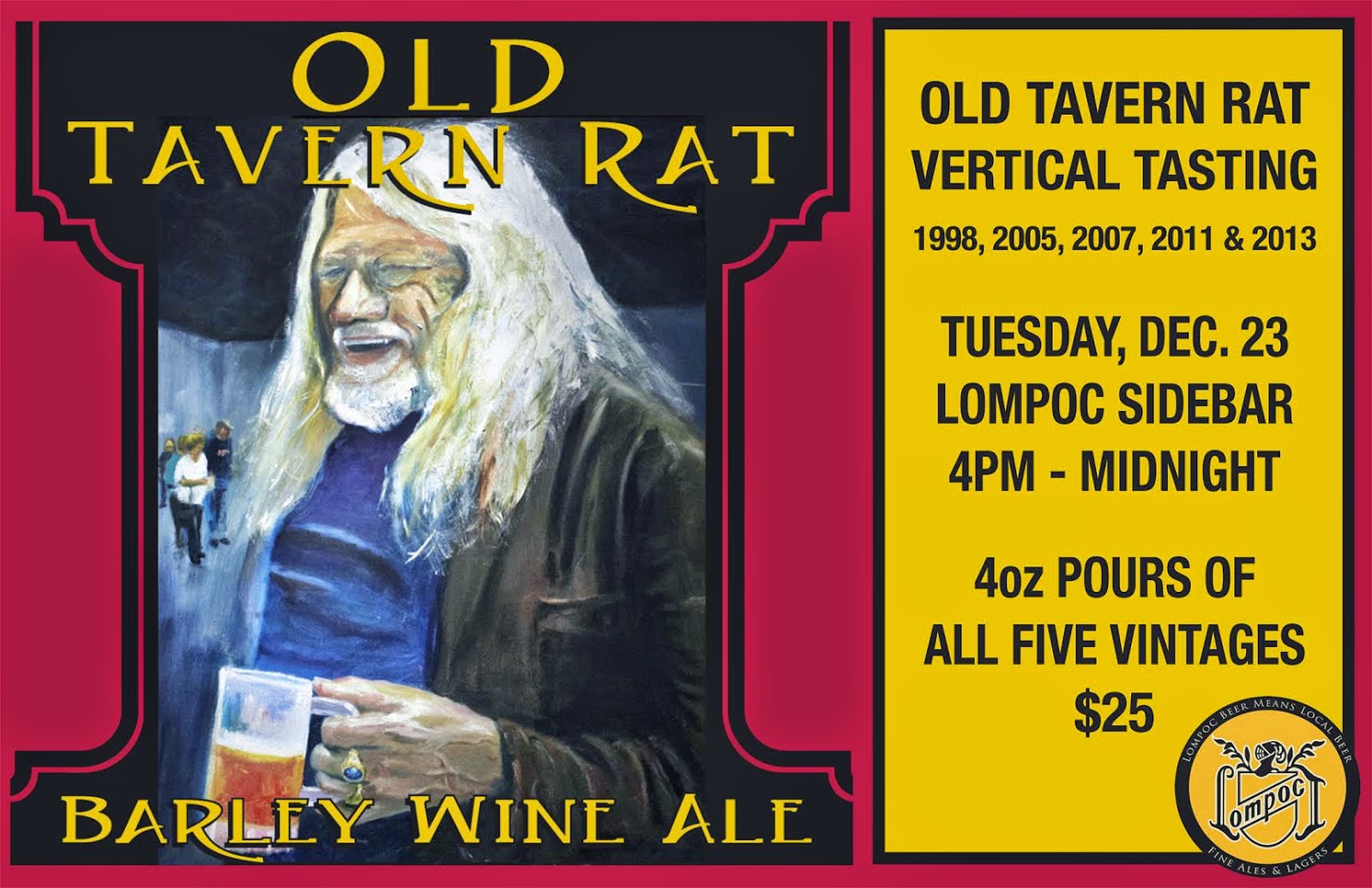 Old Tavern Rat was named in honor of the famed Portland publican Don Younger, the business partner and close friend of Lompoc owner Jerry Fechter. Though the flavors vary with each batch, the beer is generally a very intense (like Don) strong ale with a malty body and plenty of caramel, dried fruit and roast flavors. The beer’s label is a painting of Younger done by the talented John Foyston, local beer writer and painter.

A Portland staple since 1996, Lompoc Brewing creates seven flavorful year-round beers, plus a ridiculous number of seasonals. You can find Lompoc in 22 oz bottles and on draft at locations around town, and at its five neighborhood pubs: Fifth Quadrant and Sidebar in North Portland, Hedge House and Oaks Bottom in SE, and the Lompoc Tavern in NW.
For more information, visit www.lompocbrewing.com.
Posted by Joseph M. Cooley No comments:

Email ThisBlogThis!Share to TwitterShare to FacebookShare to Pinterest
Labels: Lompoc

As I walked into the Holiday Ale Fest this year at Pioneer Square the pleasant aroma of roasted nuts fills the air. I arrived to the fest just after 11 and there was no line at the door.  I walked right in and got my tickets and mug.  This year there was the option to upgrade an actual glass mug for the fest, I opted to just use the standard plastic mug for fear of dropping it on the brick floor. 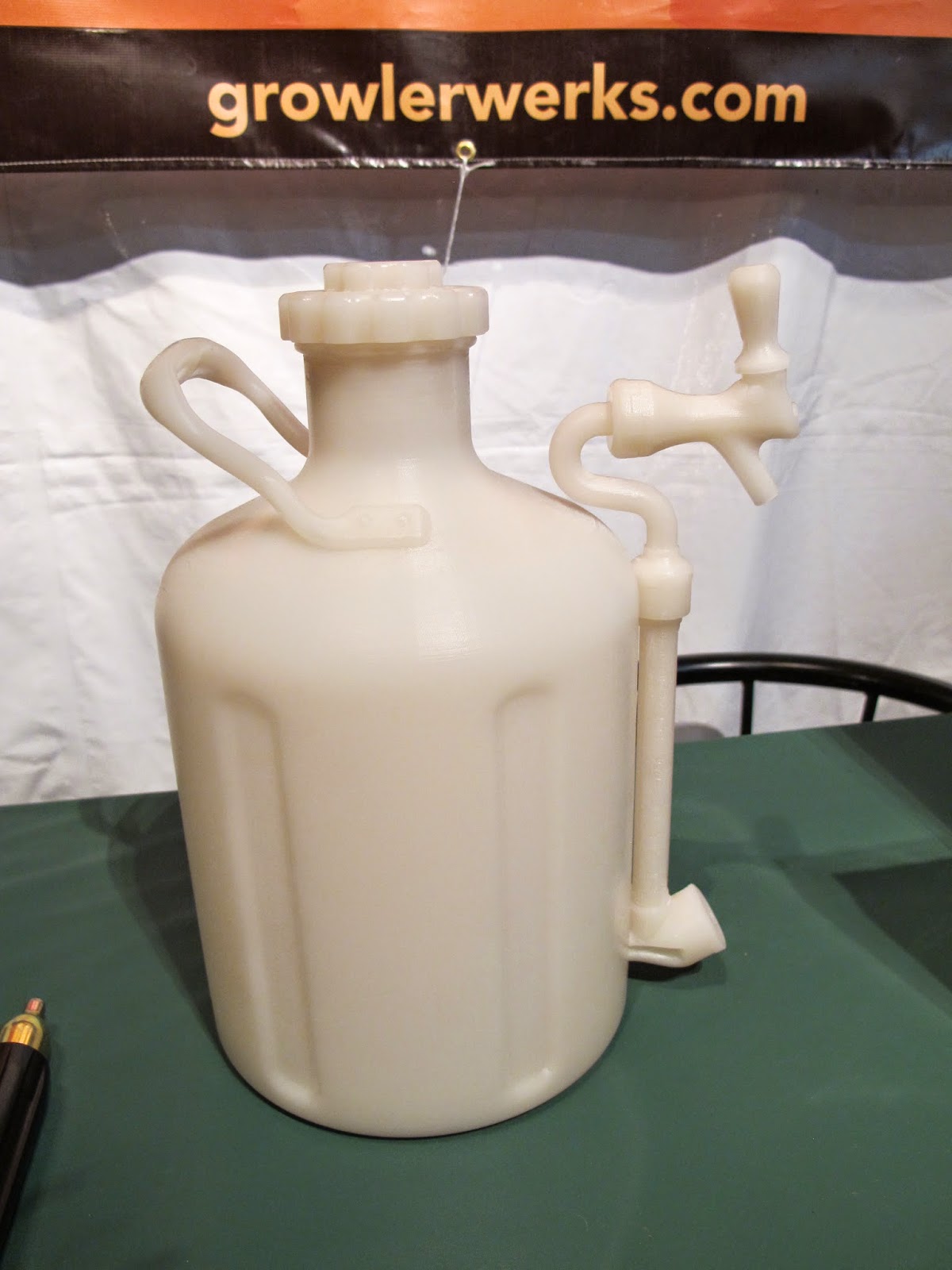 Growlerwerks had a booth at the HAF and brought the prototype uKeg64 as well as the 3D Printed model of the uKeg128.  Once they reached the stretch goal they had  a scale model printed so they could see how it fits in the refrigerator.  The campaign just ended with $1,559,525 in funding.  Over 20X their original goal of $75,000.  Making the uKeg one of the most successful kickstarters ever to come out of Portland.
There was a huge selection of beers at the festival this year. I decided to try whatever sounded good this year instead of carefully planning out each beer and drawing the most efficient route to get from beer to beer.  This makes for a much more enjoyable drinking experience.

Firestone Walker Brewing Co - Luponic Distortion - Double IPA ABV: 8.5%
A huge citrus bomb with Cascade, Centennial, Citra, Amarillo, Chinook and Simcoe hops all contributing to the aroma and flavor.  A really good beer but it didnt really stand out as something really different just a good solid IPA. B+

McMenamins Edgefield Brewery - Lord of Misrule - Rum Barrel Aged Imperial Mexican Mocha Stout ABV: 7.6%
Really solid stout, sweet cocoa coats the mouth with a thick mouthfeel and you can taste the rum barrels that this was aged in.  A very sweet cloying aroma comes off this dark brown ale. The flavor of coffee and rum are present as well as the milk chocolate. Probably one of the better beers I had all night. A-

No - Li Brewhouse - Whiskey Barrel Aged Winter Warmer - Winter Warmer ABV: 7.5% IBU: 72
Copper colored beer with a mild whisky aroma and  malt profile.  The beer is smooth and coats your mouth as its drank. Both a strong oak and whisky flavor come through from the aging almost a detractor to the flavor of the beer though, mild hop character is covered by the whisky.  C+ 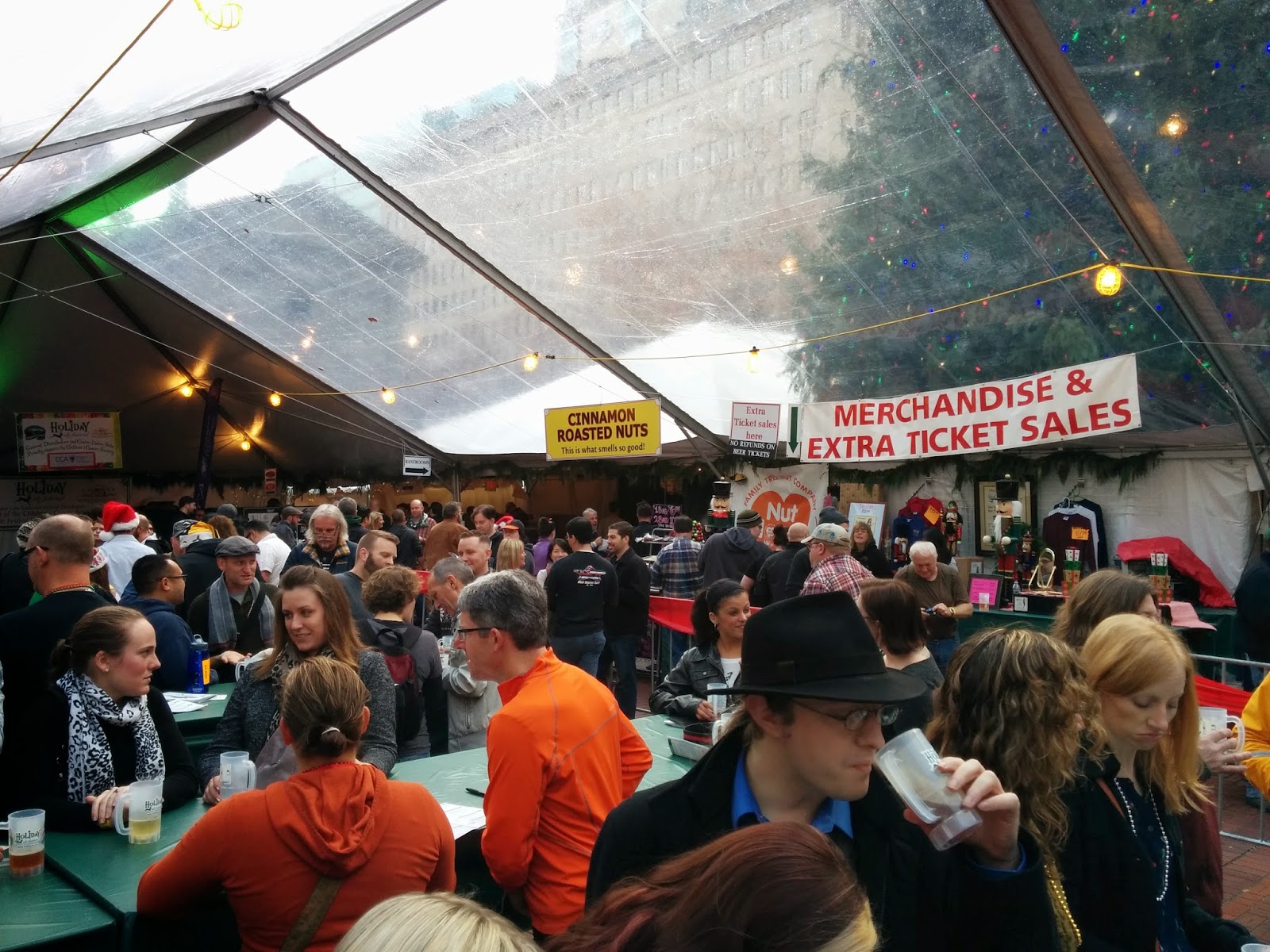 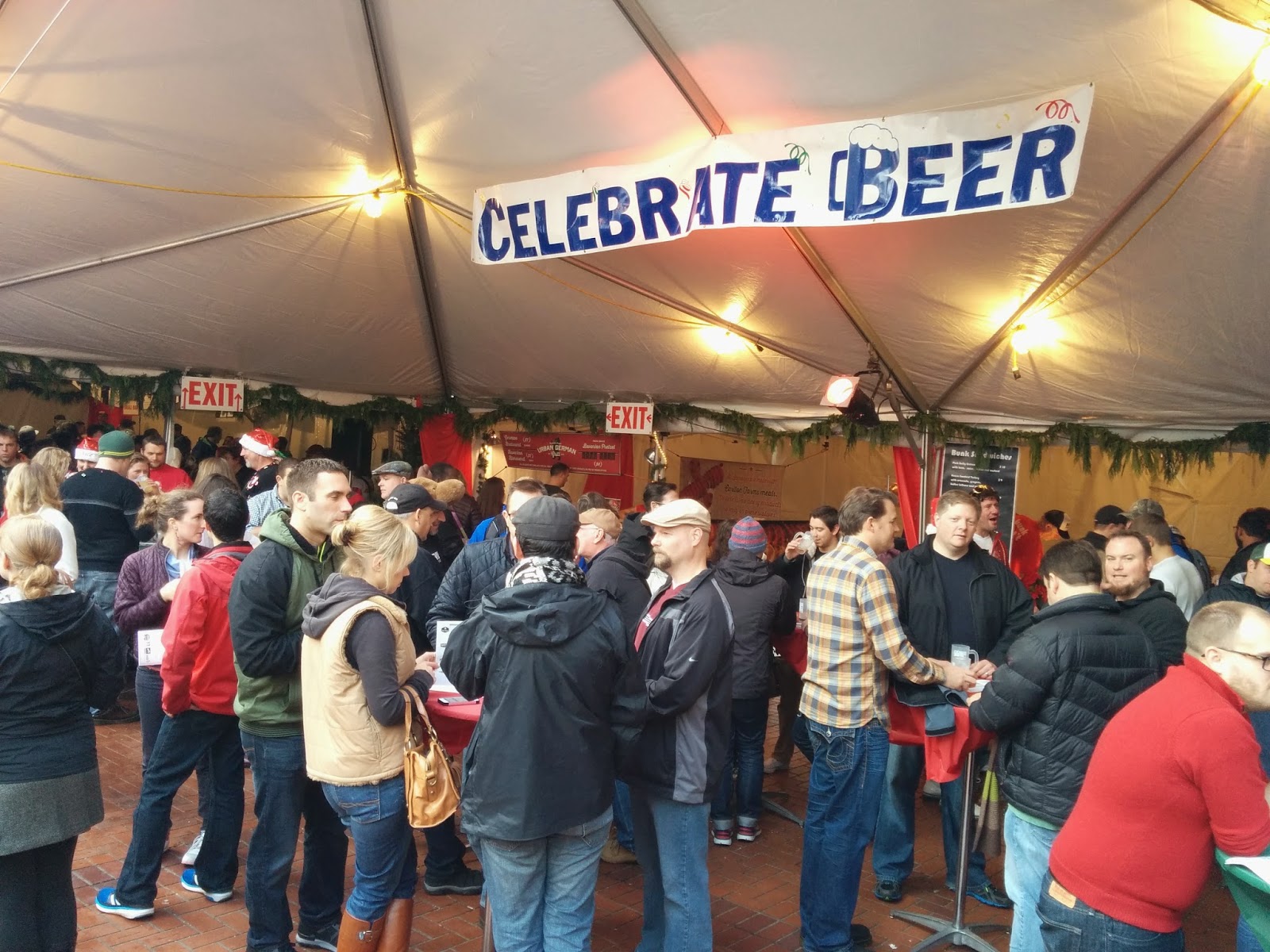 Old Town Brewing Co. - Bluth's Original Chocolate Banana Hefeweizen - Chocolate Bavarian - Style Hefeweizen ABV: 5.5% IBU: 14 I was immediately drawn to this beer because of my love for Arrested Development. Light brown beer with a caramelized sugar aroma.  The more I drank this beer the more I liked it. Not a huge banana flavor or smell but the chocolate is very present.  Roasted and warm bodies semlls like roasted nuts and candied sugar.  Having a lighter mouthfeel and medium body this beer was a real treat to drink. B+

Kells Brew Pub - MIC Stout AKA Boom Roaster - Coffee Imperial Milk Stout  ABV: 7.0% IBU: 55
A dark black beer with a deep brown head MIC Stout delivers an aroma of an iced mocha like you ordered a frappuccino from Starbucks.  The taste was sweet brown sugar and had a strong coffee flavor.  Truly a treat for any coffee lover. B

Rev Nats - Providence - This was a hot cider and not in the booklet.  I had to try it because it is not often that a hot beverage is served at a beer fest, and this seemed like the perfect local to have one. A very satisfying beverage on this cold night with lots of cinnamon and spices .  I'm not usually a huge fan of Ciders but this warm selection from Rev Nats was pretty good. B-

Cascade Brewing - Gingersnaps - NW Style Sour Strong Ale ABV: 12.1% IBU: 7
A deep bark brown almost black beer wit a huge ginger aroma.  The taste was more ginger and a small addition of a tartness.  Overall I was not really impressed with this beer and I was expecting it to blow me away with the required 3 tickets for a taster. Cascade has an excellent selection of unique and adventerious beers and are pioneers in sour beer making but when the envelope is consistently pushed you are likely to get a beer not everyone likes.  I did however hear a lot of people saying they really loved it which was why I decided to use 3 tickets on it.  Just not for me I guess.  C-

Gigantic Brewing - Red Ryder BB Gun - Cranberry Saison ABV: 6.3% IBU: 22
A light orange beer with a tart and crisp cranberry aroma.  Th beer had a slightly sour musty flavor with a light body and medium mouthfeel.  This beer didn't try to drown you in a cranberry bog but it was enough to give it a distinct flavor and smell. B-

Oakshire Brewing - Prestidigitation - White Chocolate Milk Stout ABV: 7.0% IBU: 23
I described this beer as good and that was pretty much it so that is a good signal that I needed to stop reviewing beers and just finish out the fest.  I did give it a B though for what that is worth.

Another successful year at the Holiday Ale Fest I think I may get the glass next year if that is an option but I was afraid that I may have dropped the brick as the night progressed.  Hopefully it will still be an option next year.
Posted by Joseph M. Cooley No comments: