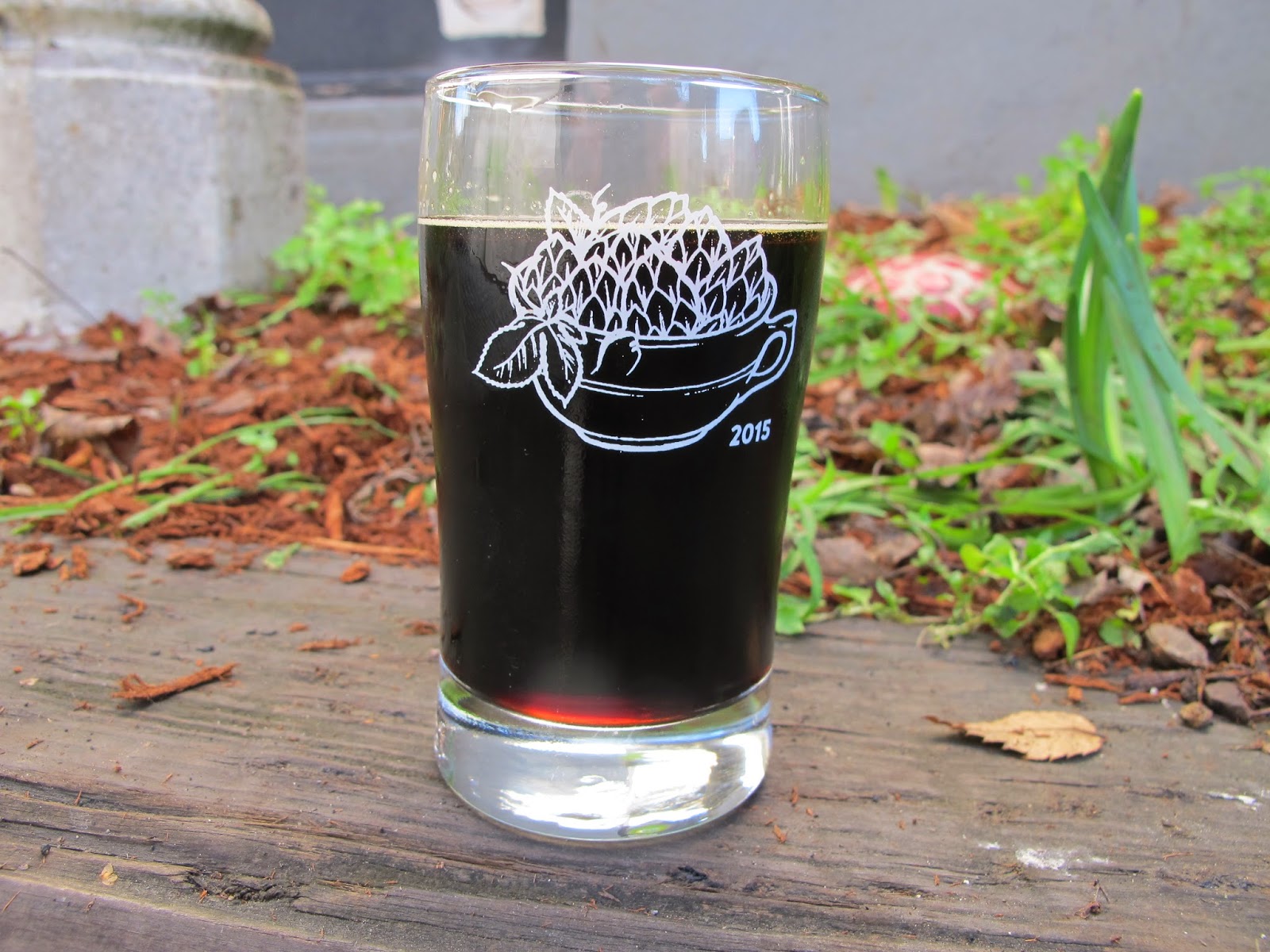 This Saturday I went to the NW Coffee Beer invitational at Goose Hollow Inn.  The weather was perfect and the festival was full of interesting coffee forward beers.

This oatmeal stout was brewed with vanilla beans and Sorbentos coffee. It has a distinct chocolate and vanilla flavor. The beer itself is an opaque black beer with hardly any head.  A medium to full body with a silky texture, soft carbonation and a smooth finish. 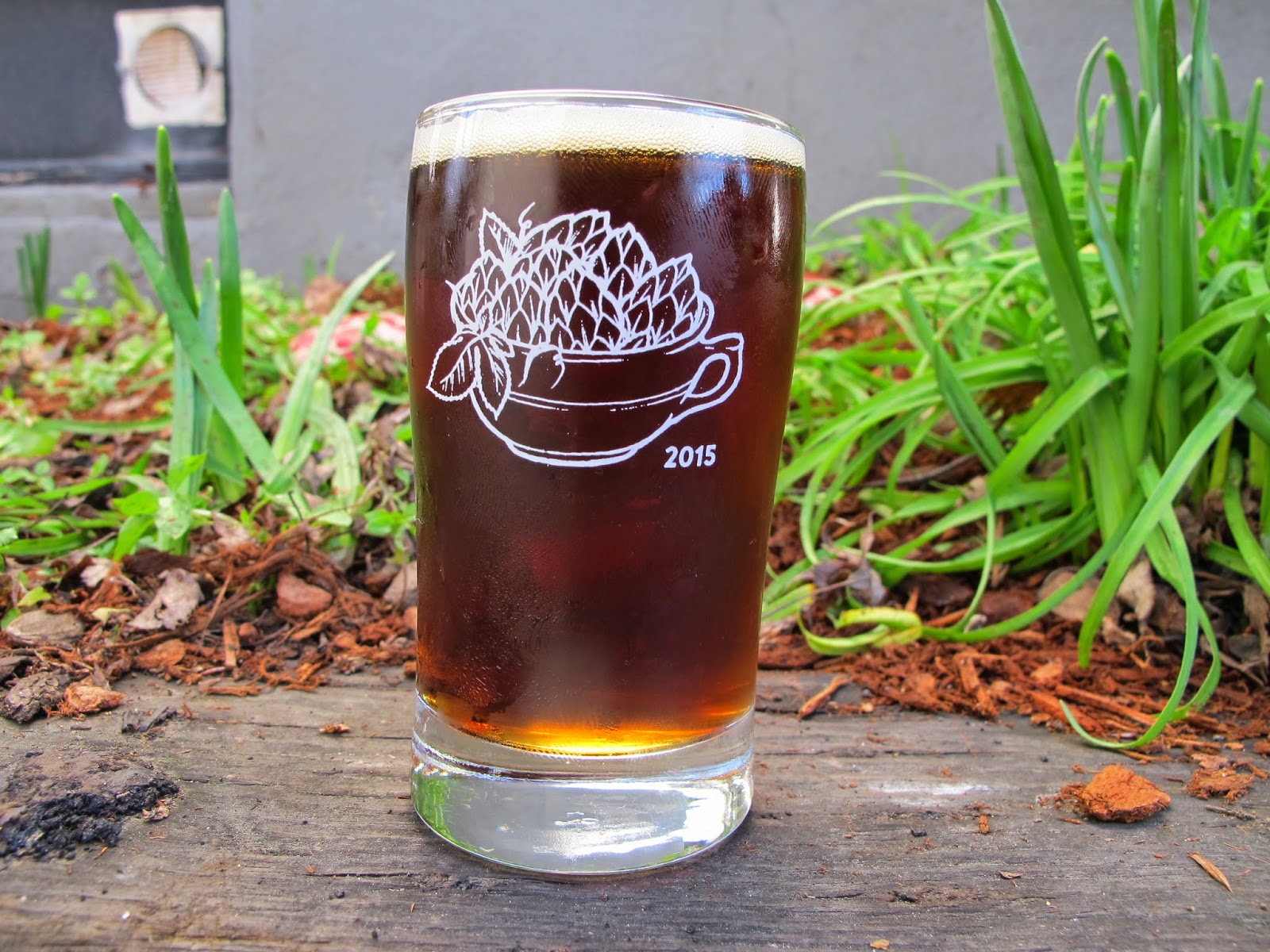 Topped by a sparse diminishing white head, this beer has a very strong chocolate aroma.  Caramelized sugar and coffee are also present in the nose.  The flavor is light roasted coffee with the support of the roasted malt as well.  A medium bodied beer with a thin texture and a soft carbonation. 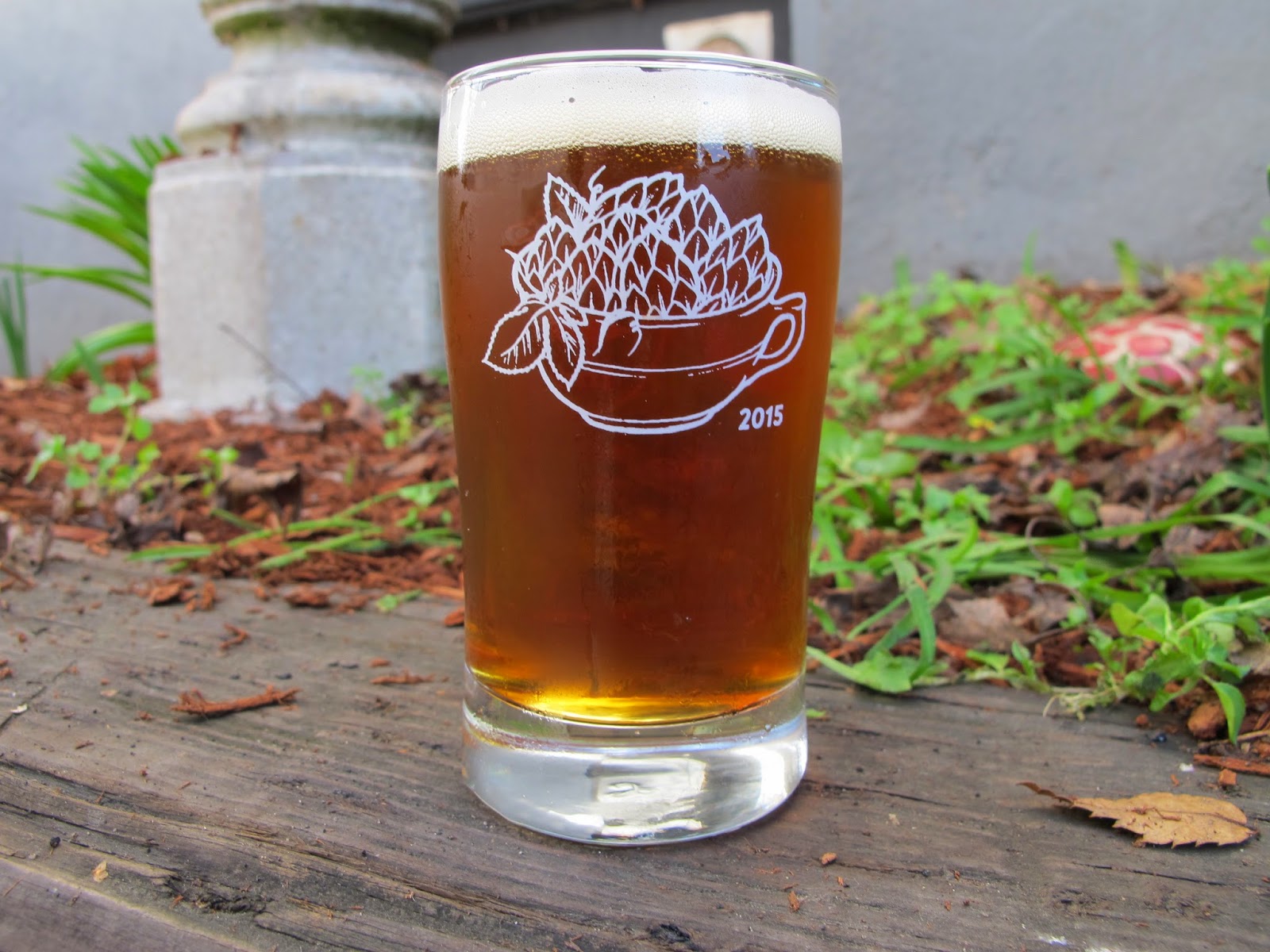 A copper colored beer with a sparse creamy head. a very light aroma of coffee and roasted nuts.  The flavor is of cookie and toffee.  A light bodied beer with a thin texture and medium carbonation.  Burundi coffee was selected for its vibrant citrus quality. 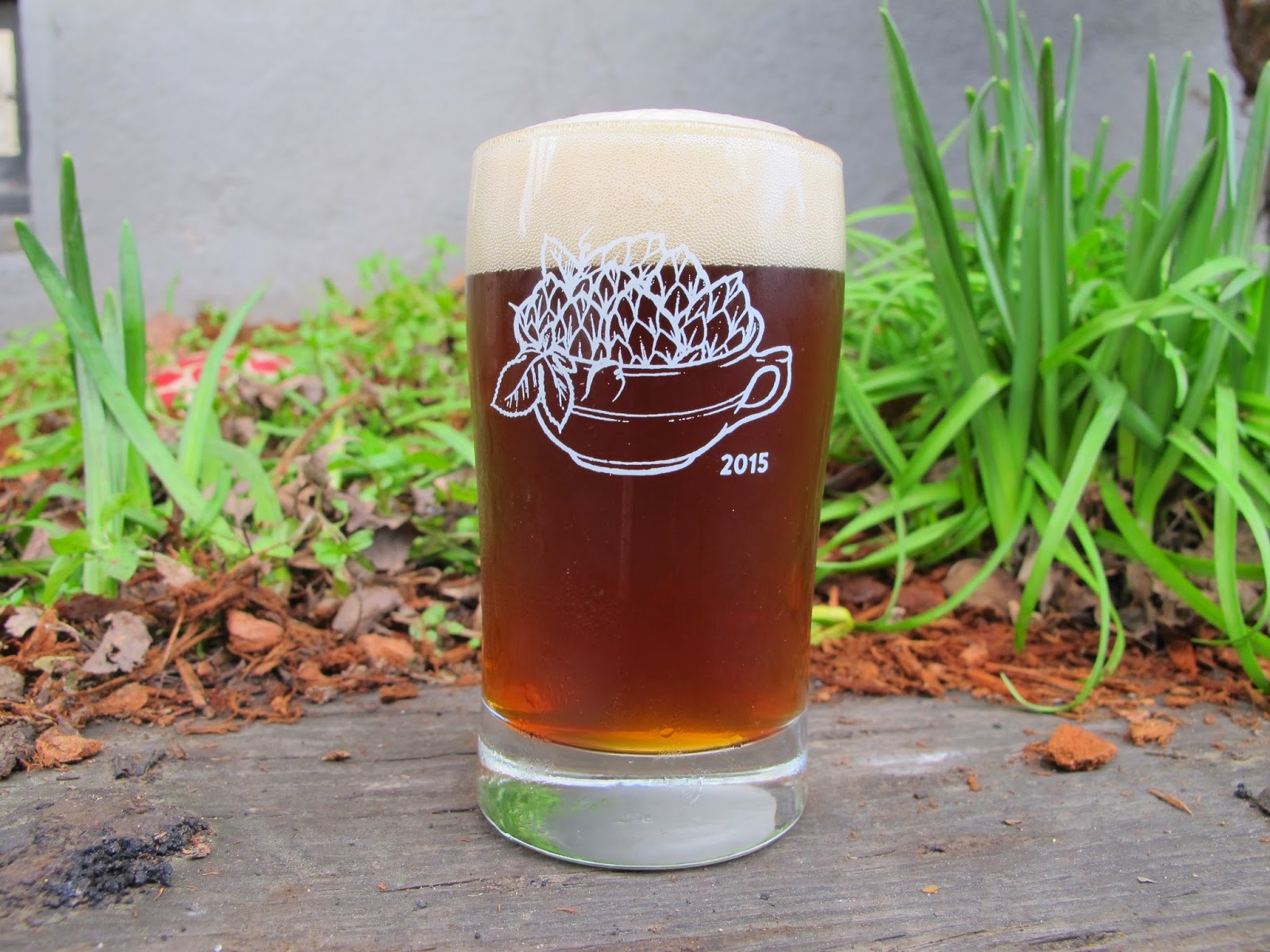 A huge foamy head with the aroma of bread and burnt malts.  Made from Costa Rican Cascara coffee from Sustainable Harvest in Portland this beer has a tea and tobacco flavor that is very unique. 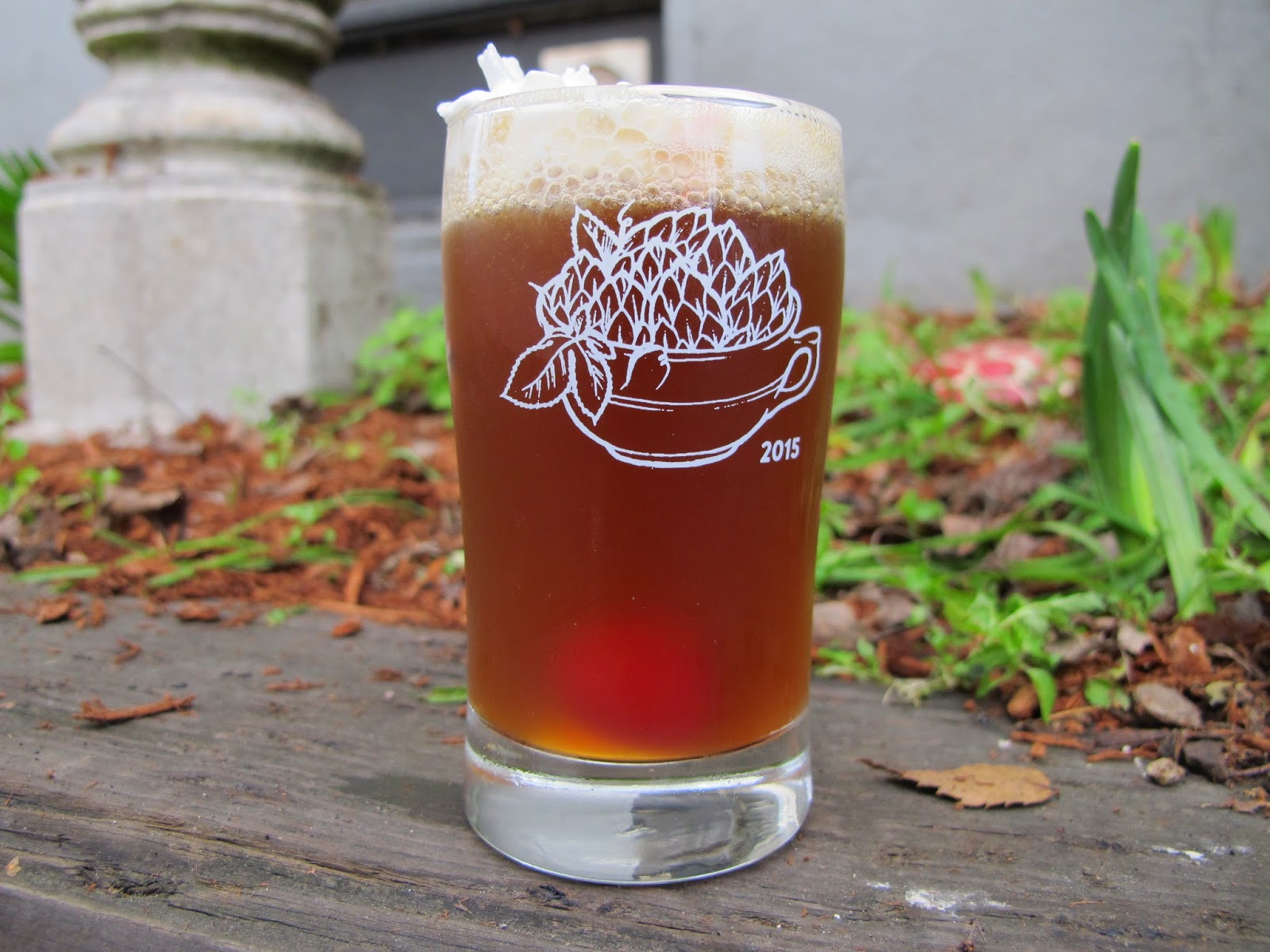 Instead of a head this beer was topped with whipped creme and has a maraschino cherry as a garnish.  I was actually dreading trying this beer because of  its presentation but it was actually pretty good.  The flavor was kick you in the groin banana with a minor soy sauce flavor.  The beer had a medium body with a silky texture, soft carbonation and smooth finish.  The whipped cream actually might have added to the flavor of the beer. 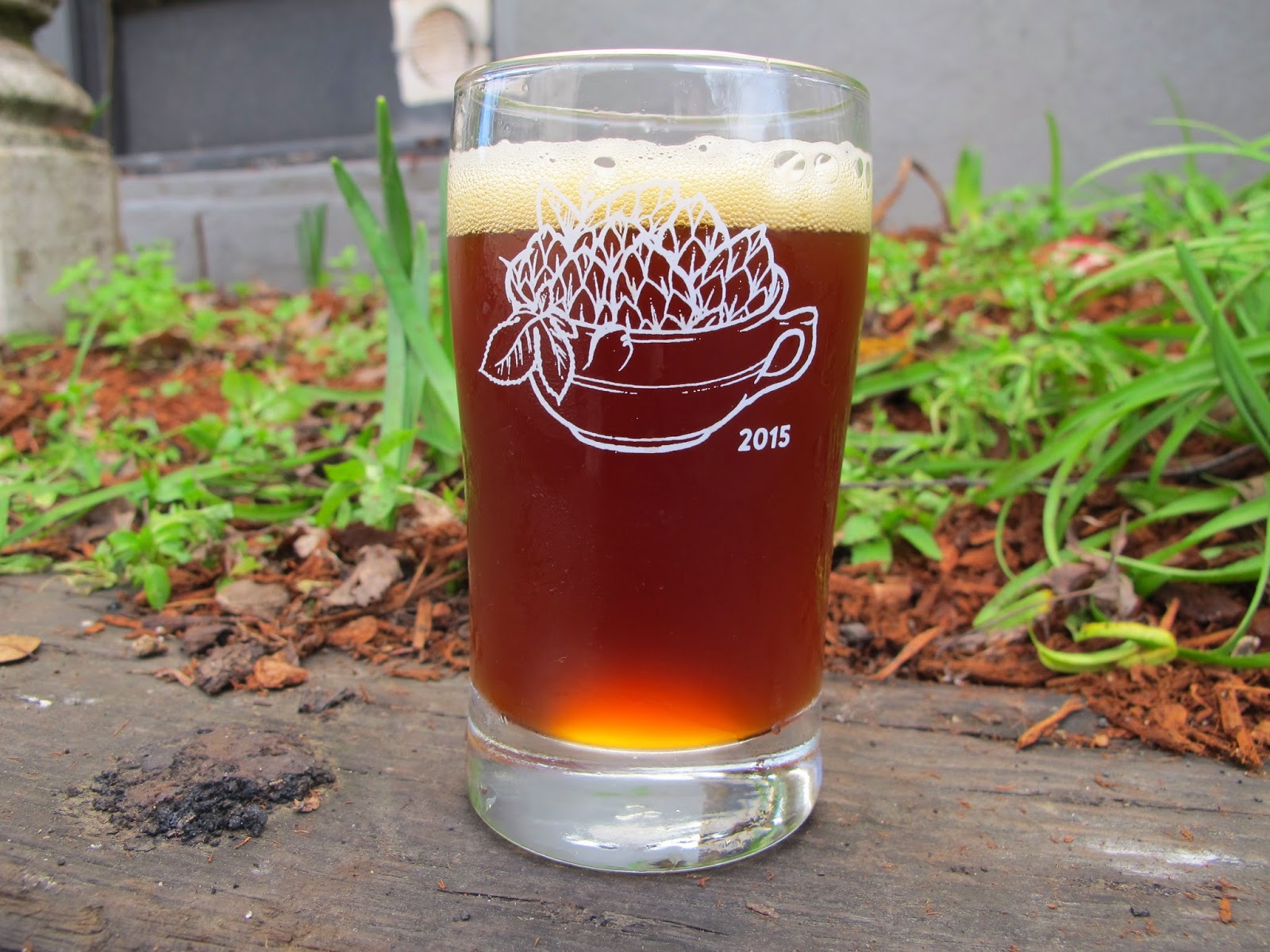 A medium frothy head tops this cloudy red beer. The aroma was that of clove and bubblegum with a mild spice character.  The bubble gum flavor caries over into the beer, without much coffee flavor.  Definitely a much more yeast forward beer than coffee.  Jumpy Juice had a full body with a thick texture, soft carbonation, and a smooth finish. 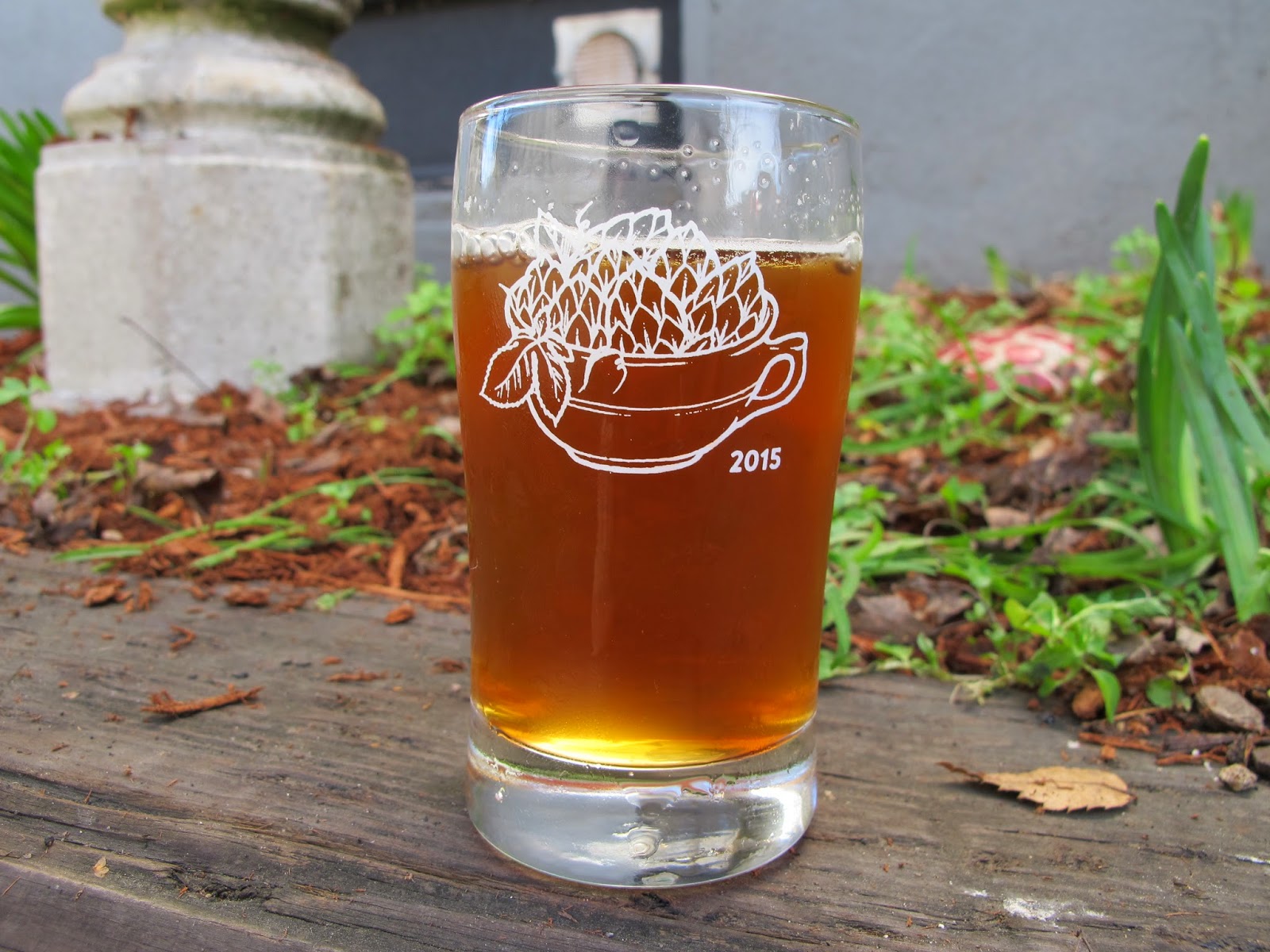 A delightful change of pace from all of the coffee forward beers today.  This beer had a great citrus hop aroma and a mild coffee flavor. Probably one of my favorite beers. Based on the Moby Dick imperial IPA infused with Rose City Coffee's Bakers Blend that has been cold pressed. 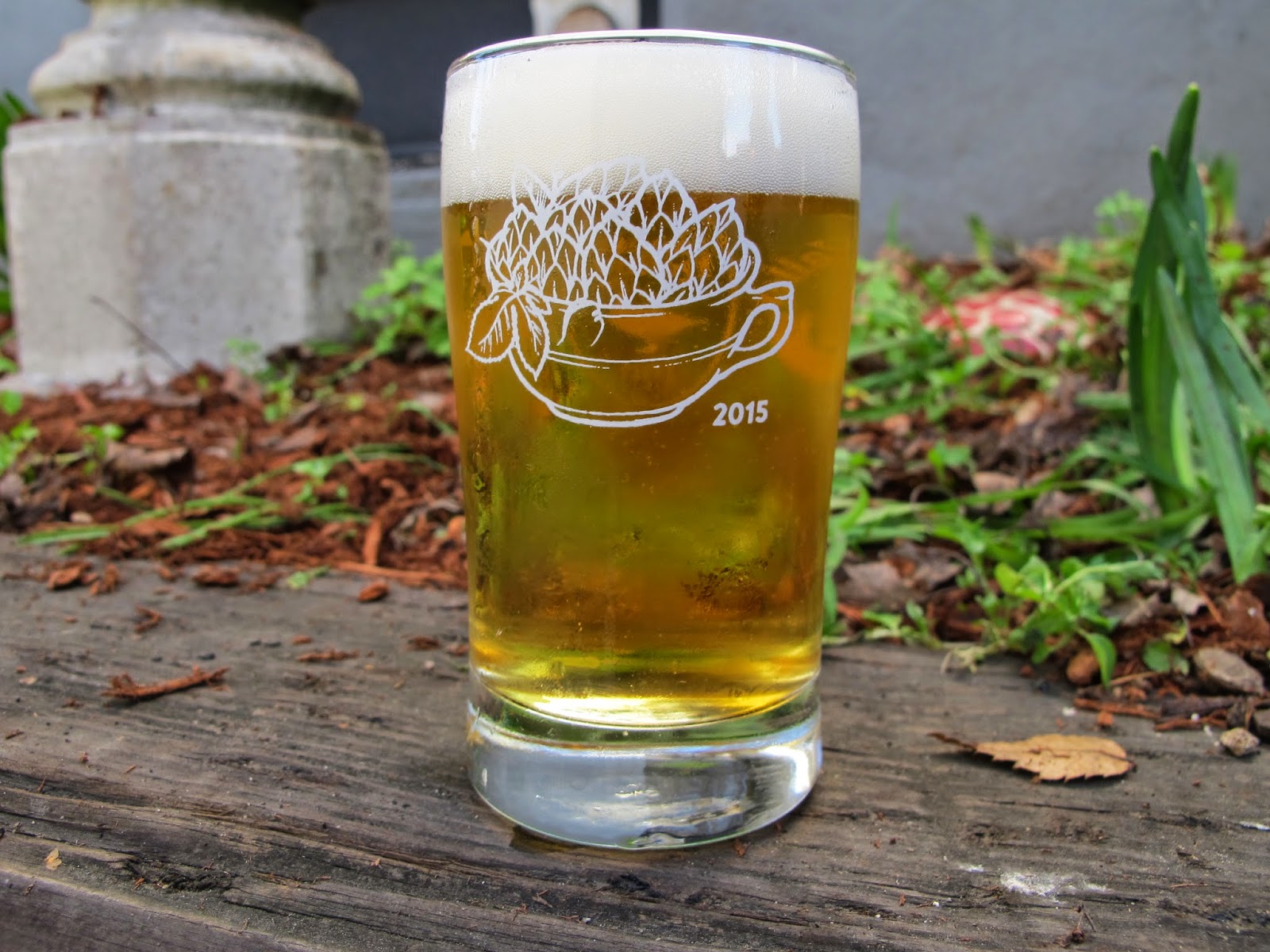 A frothy and lasting head tops this clear straw colored beer.  The aroma is very light coffee with a slight doughy smell.  The flavor is lightly hopped, the coffee is also pretty underwhelming. The body is light with a mildly mineral-like texture, a soft carbonation and a dry finish. 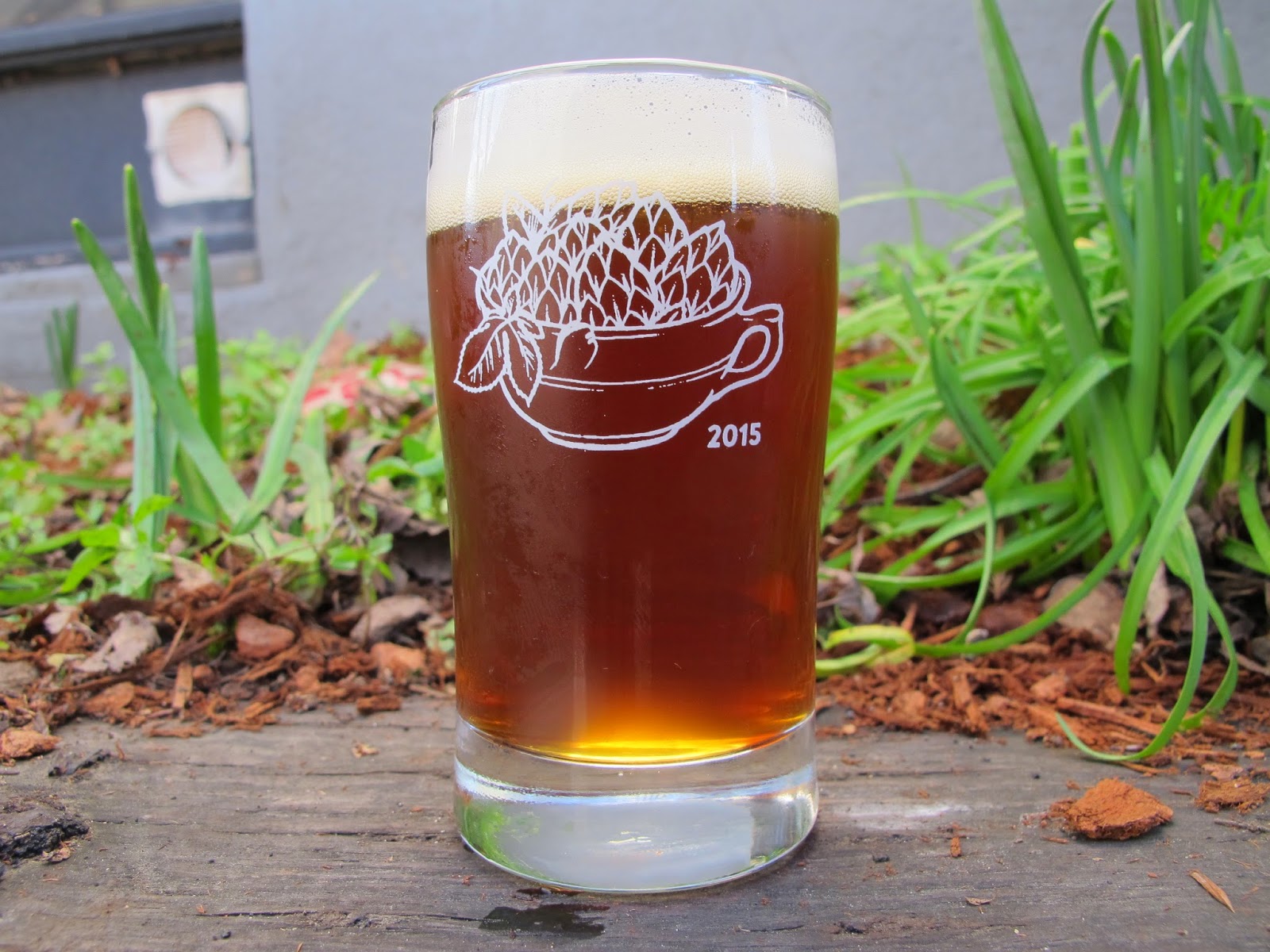 This beer has a ton of cookie and coffee aroma, like a cold cup of coffee.  This beer smells really good.  The taste is a very pleasant great caramel and coffee flavor. The coffee addition to the beer was from Compass Coffee in Vancouver. 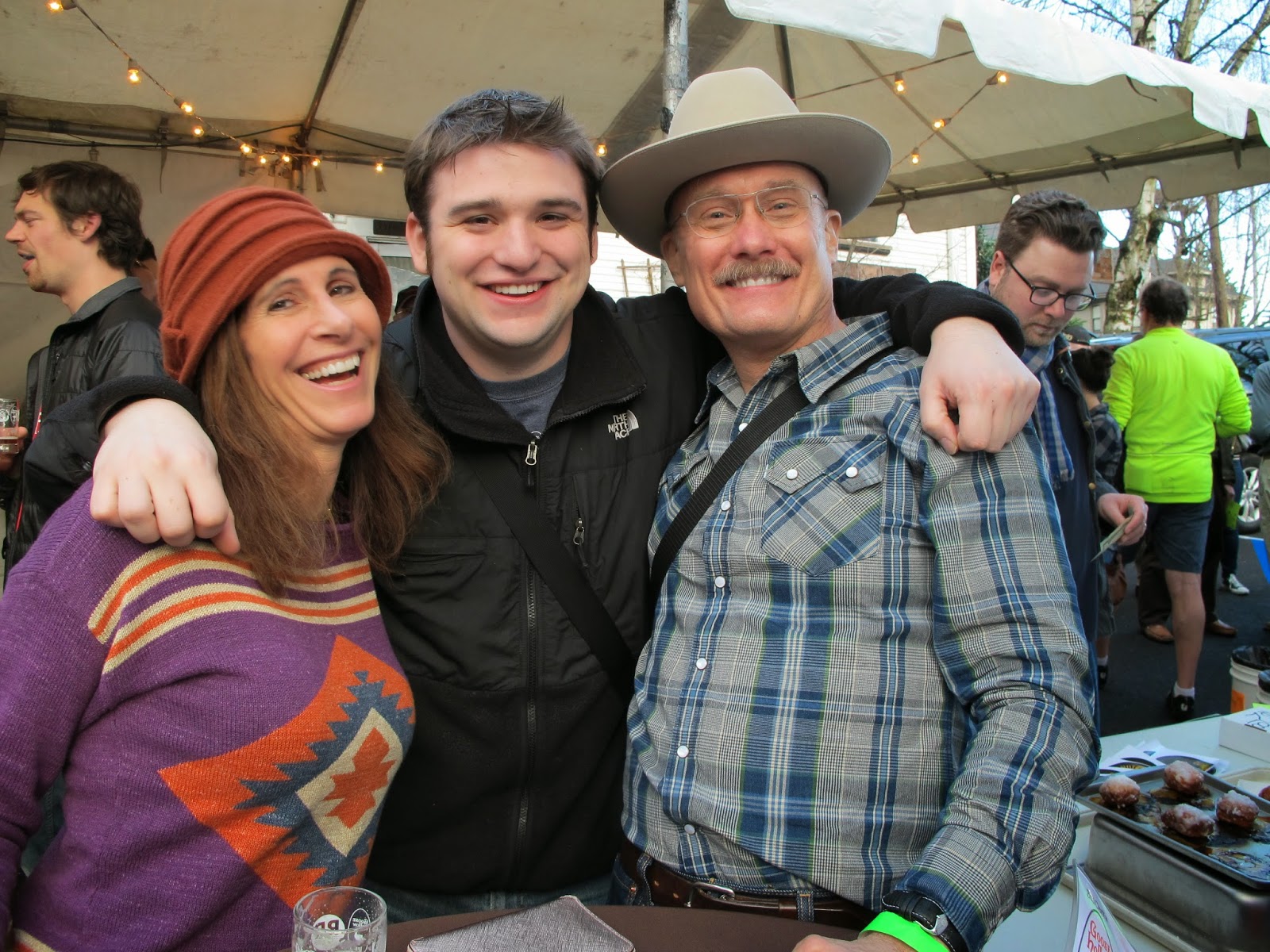 At this point in the day the beer fest was starting to get pretty busy and we had scouted out a table early in the day.  A couple of people came over and asked if they could use the table.  They turned out to be quite the delight.  The woman's name was Sarah and the gentleman in the suave cowboy hat introduced himself as Plutarco (we later discovered it was really Patrick.) Plutarco told us a story about when he was in Las Vegas and went to a Tom Jones show and it was "back in the day" when women would tie their room keys onto their underwear and throw them on stage.  It was quite the interesting conversation and some really  fun Portlanders. 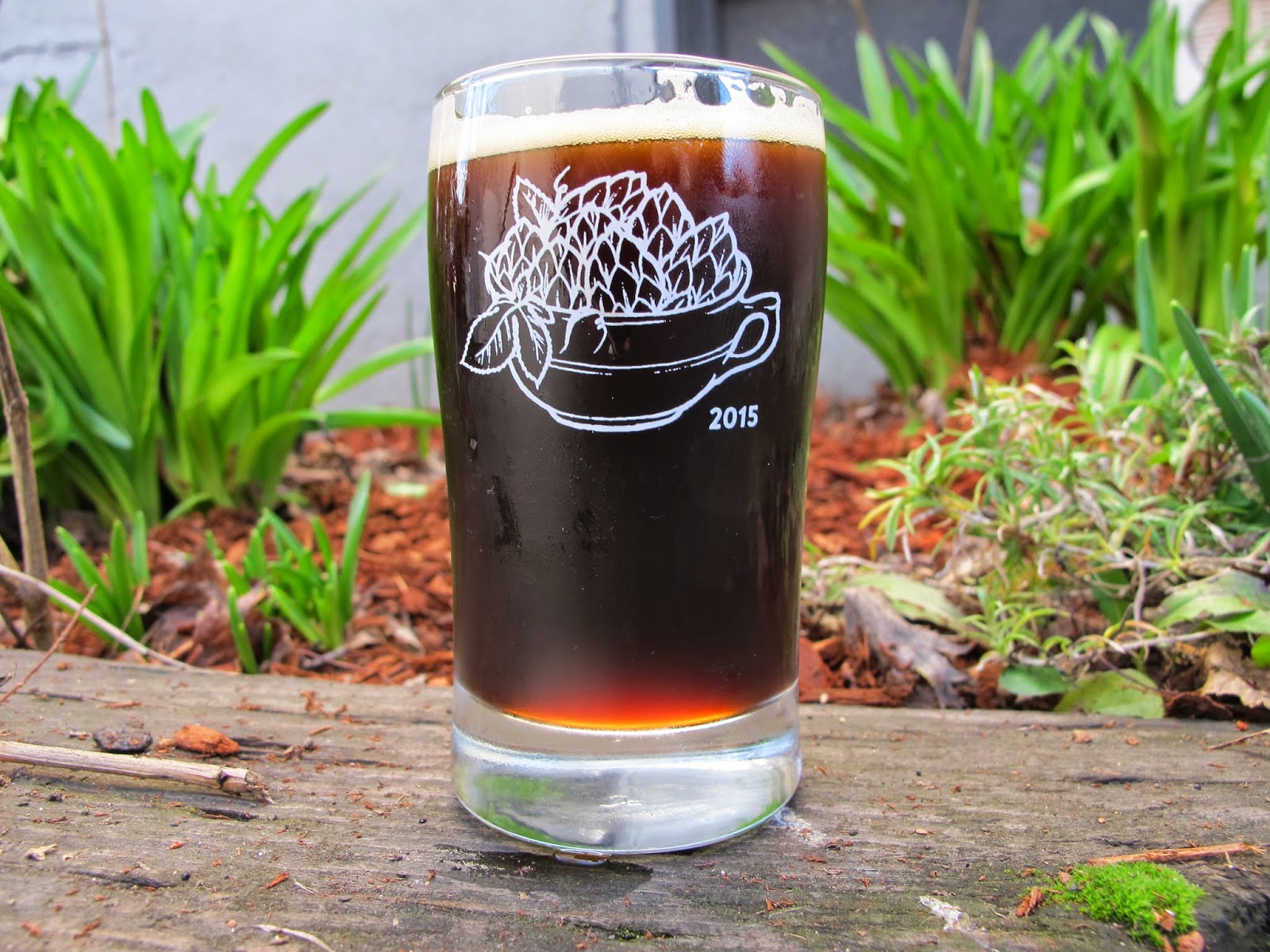 A sparse and frothy head covers this root beer colored beer.  The aroma is very redolent of chocolate and coffee that transfers nicely into the flavor.  This beer has a medium body with a creamy texture and medium carbonation.  An overall good beer. I really enjoyed this beer. Based on the FOTM electric mud with fresh roasted Guatamala Tikala coffee beans from Spella Cafe. 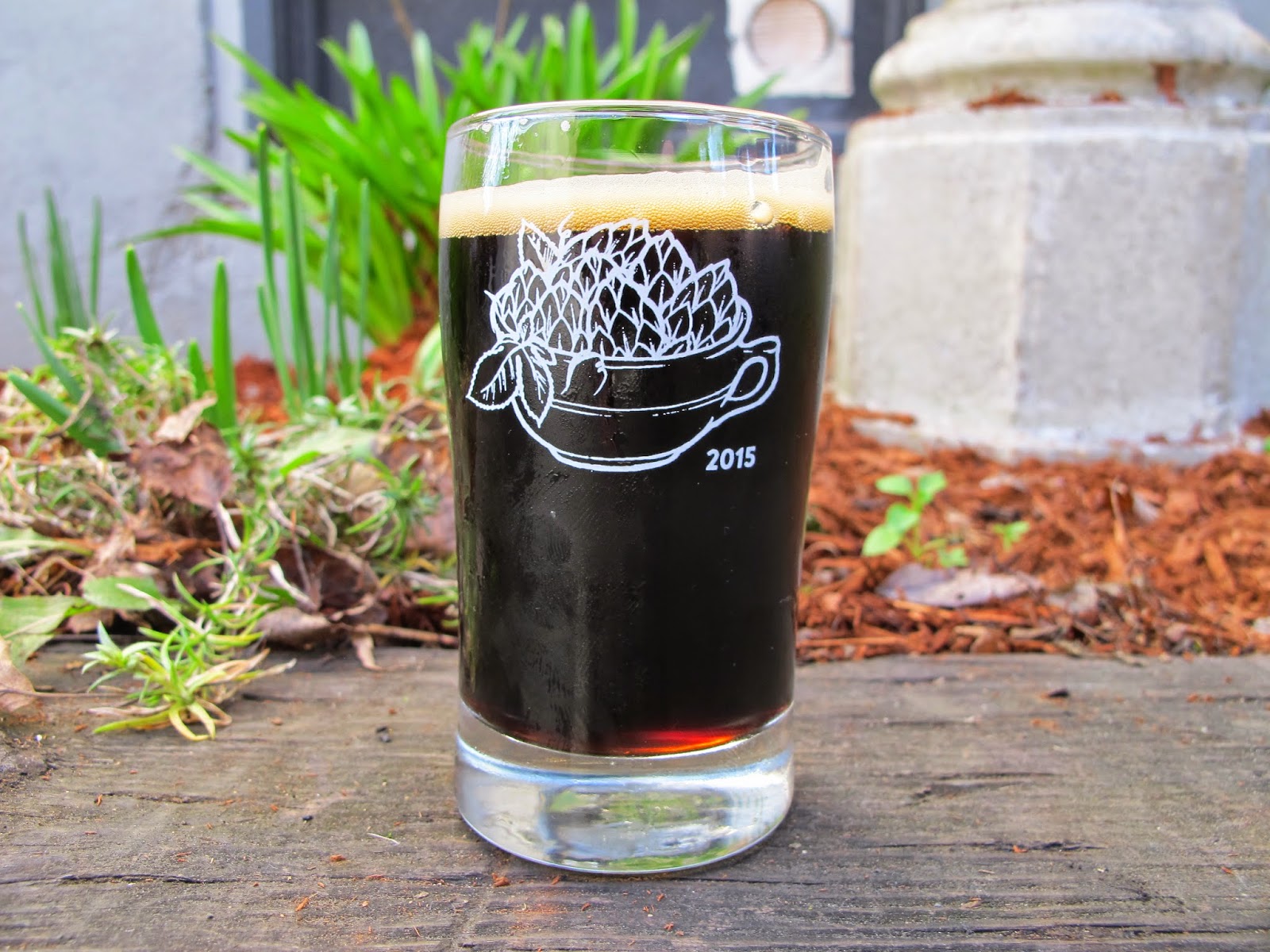 The aroma and flavor of this beer  had a chili pepper character to it, but no heat.  The beer is black with a small foamy head. There was a thick and heavy body.  This was probably the best beer I had all day, thanks to the cold brew Stumptown coffee. 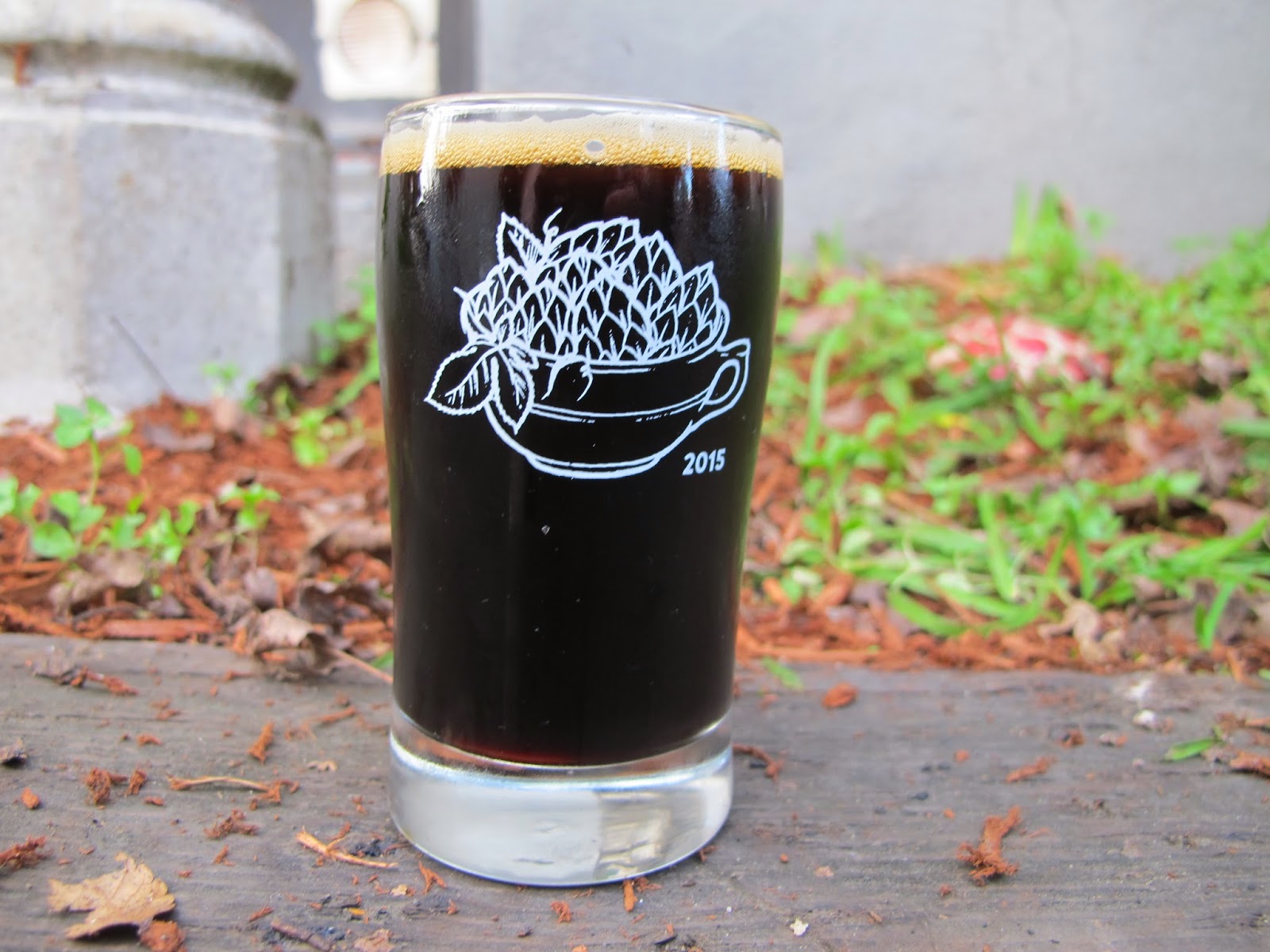 An opaque black beer with a tan foamy head has a coffee and burnt grain aroma that transfers into a sweet coffee flavor.  The body of the beer was pretty thick, overall a good beer. A collaboration with Mud River Coffee Roasters in Corvallis using their lightly roasted Kilenso Rasa from the Sidamo region of Ethiopia. 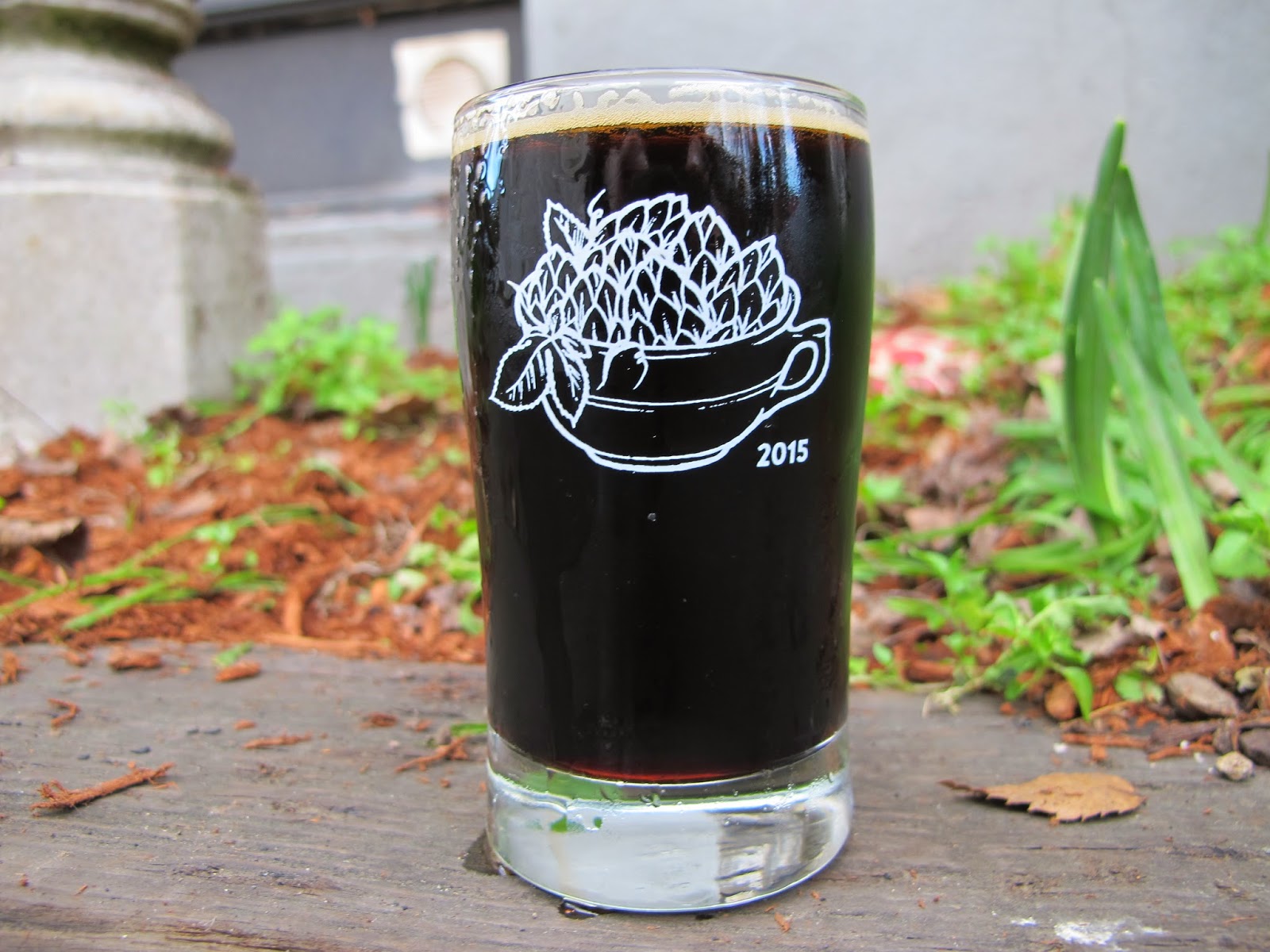 A black flat beer with coffee and toasted malt aroma.  The flavor is pretty much just coffee with a hint of chocolate and caramel.  A medium bodied beer with a thin texture and soft carbonation.  Using cold pressed Coava Roasters coffee to help give a chocolate caramel flavor to this beer. 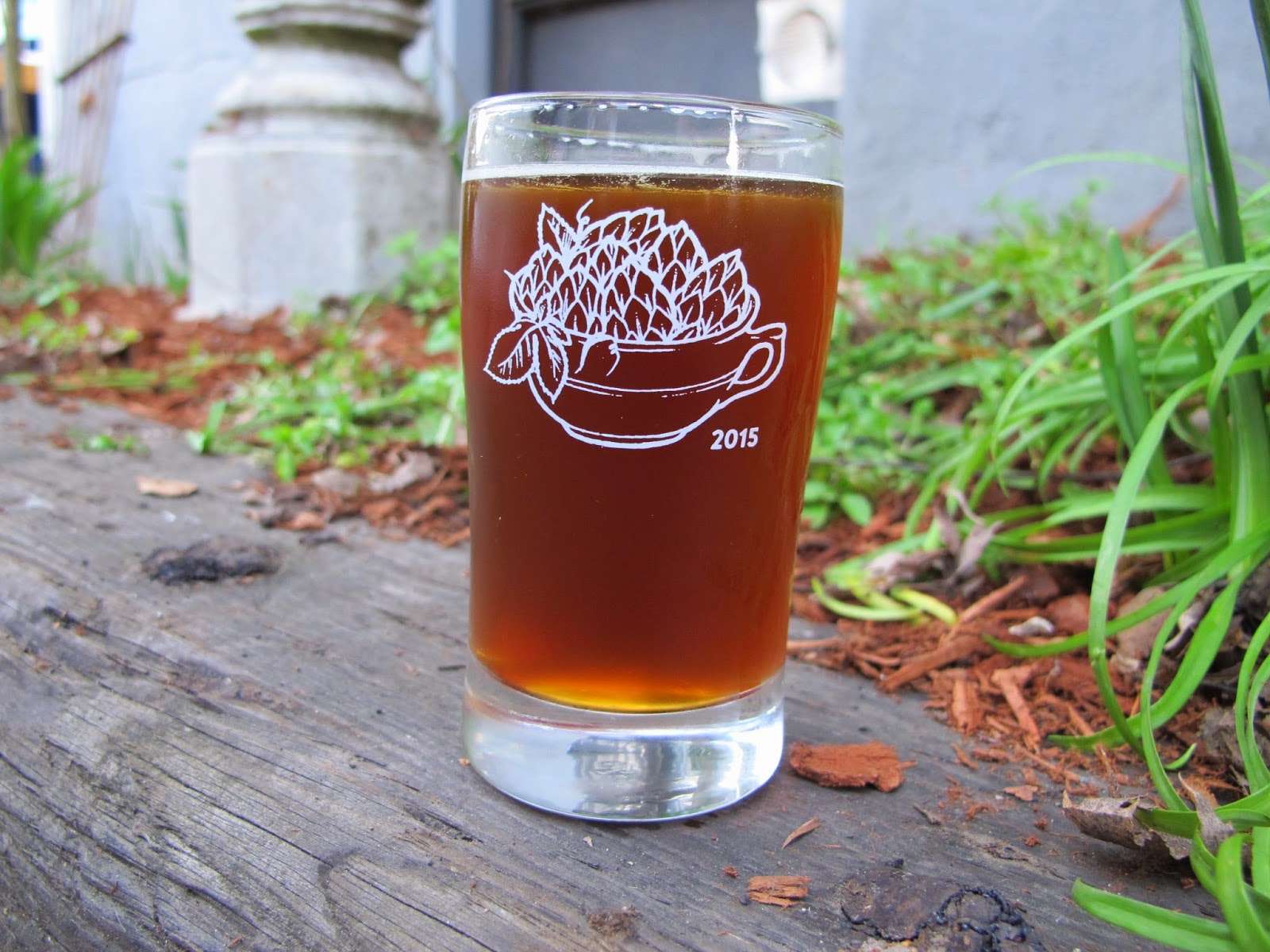 A very still brown ale with almost no head has a coffee aroma and a bitter coffee flavor like that of a cold cup of joe.  This red ale had a thin body and light carbonation.  The coffee used in this beer was Portland Roastings french roast coffee. 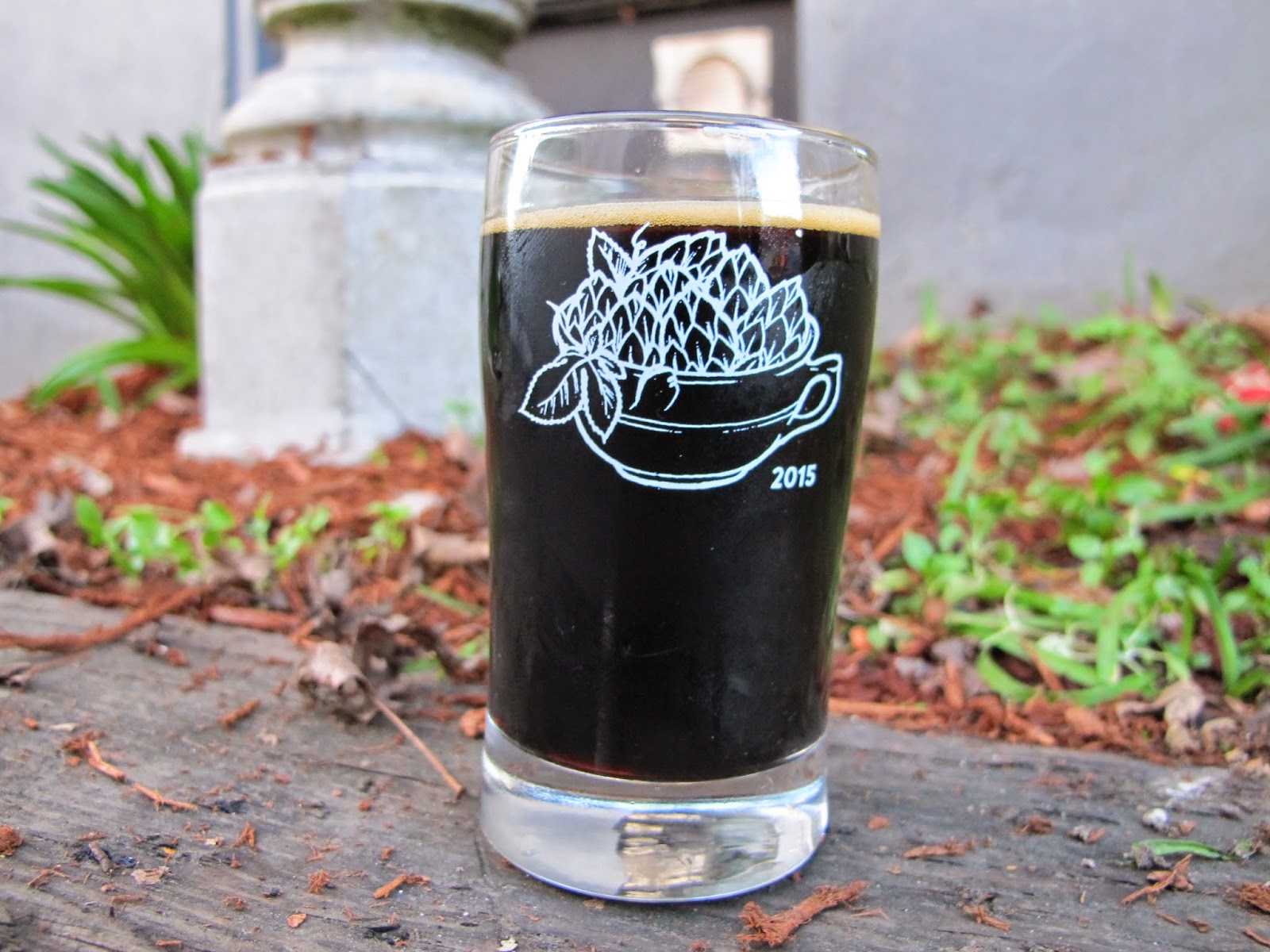 A black beer with a very small head and a toasty coffee aroma.  A full bodies beer has hints of chocolate and a sharp coffee aftertaste.Brewed with Signature Coffee from Humbolt. 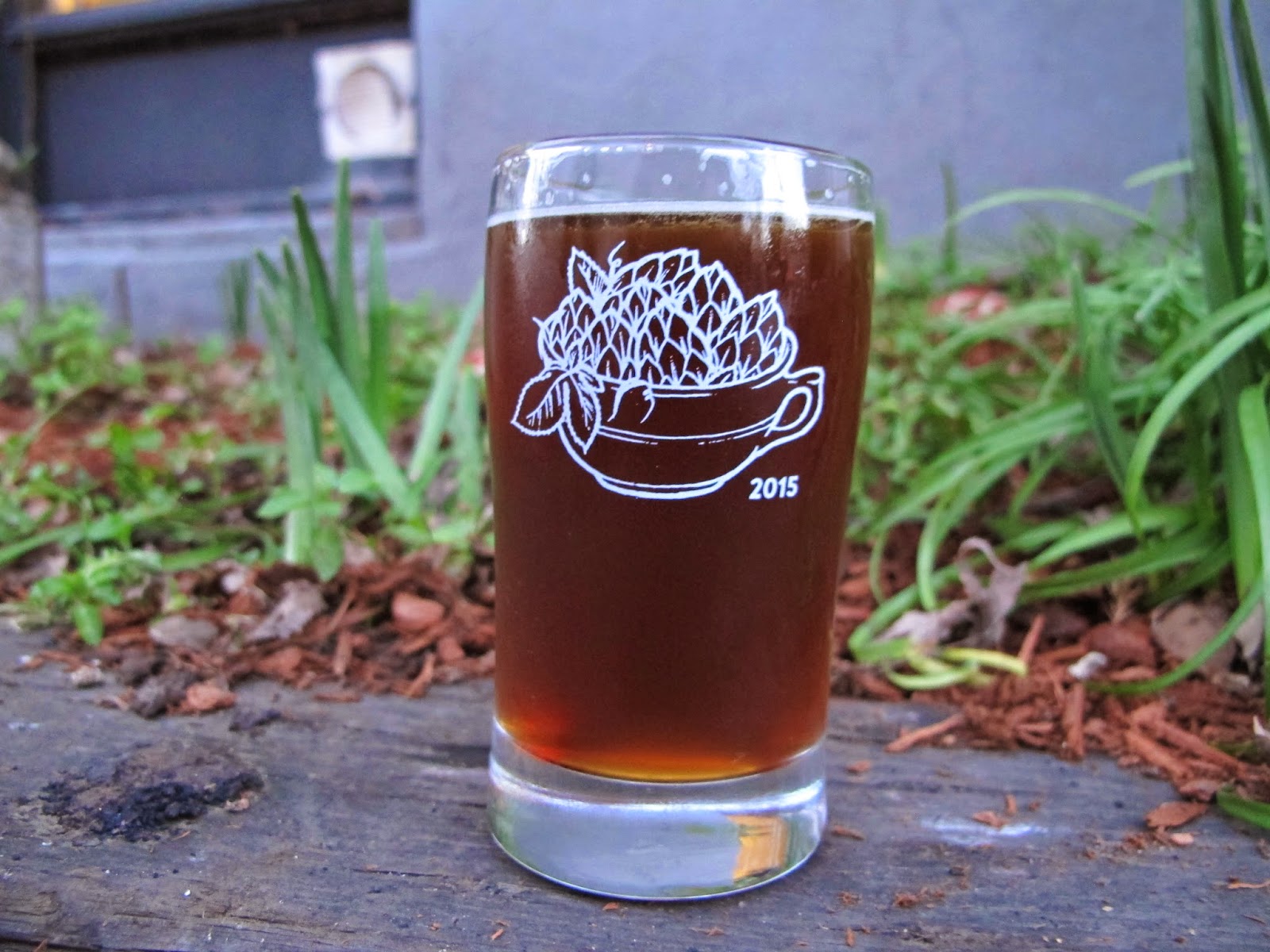 This was probably the most unexpected beer I had the whole day. This brown ale with little head had the distinct aroma of pine-sol and cardamom.  The flavor was seemed as if it was aged in gin barrels or was steeped with pine needles.  A thin mouth feel did not do this beer any favors.  Probably my least favorite beer here.

Another successful Coffee Beer Invitational I had a great time and tried some really interesting coffee beers.  The weather was much nicer this year and the addition of a couple extra tents helped cut down on the wind I think.  The only thing I noticed was the pours were a little more stingy this year.  Nothing to write home about but you can see most of the glasses had ample head space.  Which contributes to a decent percentage of the beer when you're dealing with such a small glass.  Overall great fest though I can't wait until next year.  I was impressed with how busy it was even though there were 3 additional fests and a bottle share going on that day.
Posted by Joseph M. Cooley