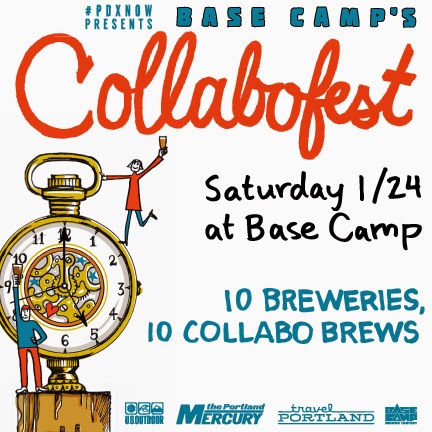 Travel Portland, the official destination marketing organization for the city of Portland, is partnering with Base Camp Brewing Company to introduce a series of limited-availability #PDXNOW beers as part of the organization’s larger “Portland is Happening Now” winter tourism campaign.
In a program spearheaded by Base Camp, 10 Portland breweries have paired up to create 10 different #PDXNOW brews. Each pair shares a particular beer style, but individual breweries have crafted their own interpretations, utilizing local ingredients to showcase the brewing talents found around the clock in Portland. The #PDXNOW beers will be available at the breweries’ respective taprooms from Jan. 24 through Feb. 28. Also available, while supplies last, will be the #PDXNOW “Beerport” passport with tasting notes on each of the beers.
“Portland is the ultimate destination for beer lovers. With more craft breweries than any other city on the planet, Portland is the craft brewing capital of the world,” said Courtney Ries, Travel Portland marketing director. “This limited-availability series showcases a variety of breweries in town, and we hope this encourages beer lovers to visit Portland before they miss this exclusive collection.”
“This initiative typifies the collaborative spirit Portland is known for,” said Ross Putnam, co-founder of Base Camp Brewing Company. “Portland has an amazing craft beer scene that has made this city home to some of the best beers in the world. We’ve very much enjoyed working with this group of exceptional breweries to create a #PDXNOW collection that both tourists and locals are sure to love.”
Here’s a look at the #PDXNOW brews, which debut on Jan. 24:

Launch Event:
#PDXNOW Presents Base Camp’s Collabofest, Jan. 24, noon–8 p.m.
Beer lovers will be able to meet the brewers and sample all 10 limited-edition beers in one location at the kickoff event. The family-friendly celebration will be held Saturday, Jan. 24, from noon to 8 p.m. at Base Camp Brewing Company (930 S.E. Oak St., Portland). Collabofest will cover two city blocks, feature iconic food trucks Koi Fusion, Gonzo and Grilled Cheese Grill, and host a free, all-ages ski and snowboard rail jam (7-10 p.m.), presented by local clothing brand All The Homies and complete with fresh snow trucked in from Mount Hood.

$35 for VIP entry, which includes a Klean Kanteen Collabofest steel pint cup, #PDXNOW Beerport,10 tickets (each good for a 5 ounce pour), tokens for two full pints and early admission at noon, Prices will increase by $5 on the day of the event.