Hopworks has announced the release of three beers.  Nonstop Hef Hop - a dry hopped american sytel Wheat Beer, Potato Gun IPA - A collaboration with Payette Brewing to create a purple Idaho potato beer, and the return of their Seasonal Rise Up Red. Tonight and tomorrow they will be hosting a release party for Potato Gun IPA at the Hopworks brewery on Powell tonight.  A keg will also be sent to Civic Taproom tomorrow.  See fill press release below:
Nonstop Hef Hop! 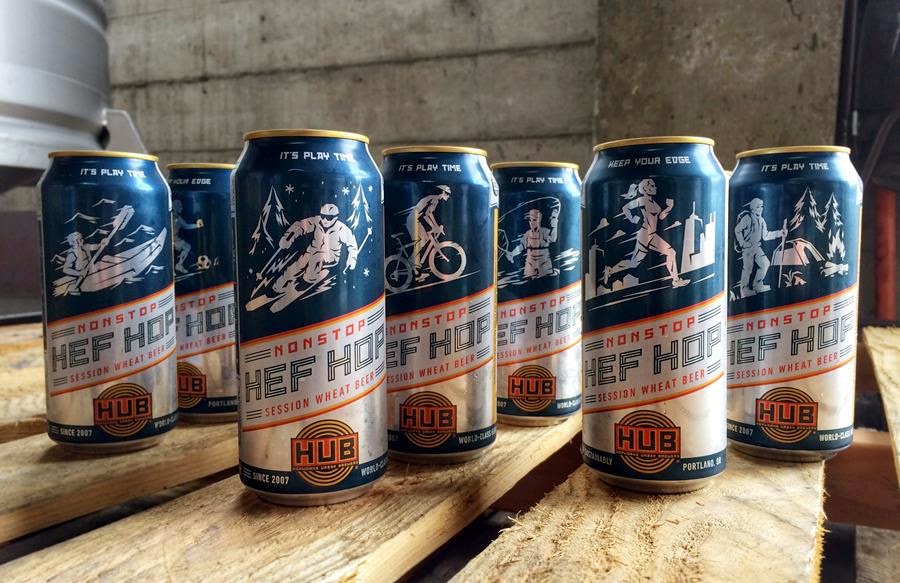 Today we release our newest beer - Nonstop Hef Hop. This low-alcohol, dry-hopped American-Style Wheat beer was created for drinkers who maintain active lifestyles. The beer clocks in at just 3.9% ABV and has the feel of a NW Pale Ale in body and flavor, but without the extra weight, calories, and alcohol. Nonstop Hef Hop is brewed with a variety of organic NW hops, organic malted barley, and red spring wheat grown on the Hopworks estate farm on San Juan Island.

We wanted to package this beer in a way that echoed Nonstop Hef Hop's "keep your edge" spirit. So we canned the beer in twelve different 16 oz cans, each showcasing different NW Activities. Each 4-pack will feature a random assortment of designs including: bicycling, camping, running, kayaking, soccer, basketball, darts, corn hole, skateboarding, disc golf, skiing, and fishing. Be the first to collect all twelve!​ ​

Potato Gun IPA (Idaho Potato Ale) is our collaborative beer with Payette Brewing, in Boise. It was brewed with over 50 lbs of organic Idaho Purple Potatoes. The beer will be released at Hopworks on Powell tonight, February 18, at 6pm. Meet the Payette team and try some Purple Potato Fry specials! Hopworks Urban Brewery is located at 2944 SE Powell Blvd. Portland.

Today we also release our classic seasonal, Rise Up Red IRA. Rise Up Red IRA is one of the first beers brewed at Hopworks, it won a gold medal at the 2009 Great American Beer Festival and has remained a cult classic for years in the Pacific Northwest. The seasonal offering is an India Red Ale, mahogany in color, smooth, made with certified organic barley, and packed to the rafters with organic kettle hops. The beer is then dry-hopped with Salmon-Safe Certified hops at to punch up the aroma.
Posted by Joseph M. Cooley