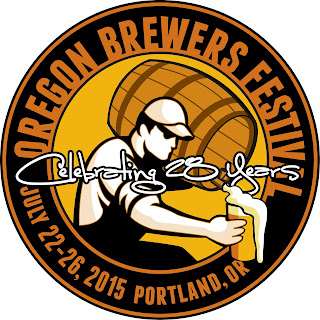 Admission: The OBF is not a ticketed event; admission into the festival venue is free. In order to consume beer, purchase of a 2015 souvenir tasting cup is required and costs $7. Beer is purchased with wooden tokens, which cost $1 apiece. Patrons pay four tokens for a 14 oz cup of beer, or one token for a 3 oz taste. Cups and tokens are sold on-site; they are also available up to two weeks prior to the festival at select local locations, including Raccoon Lodge & Brew Pub, Cascade Brewing Barrel House, Belmont Station, Deschutes in the Pearl, Rogue Ales Public House and the Green Dragon. The festival is cash only, and there are eight ATMs on-site.

The Oregon Brewers Festival exists to provide an opportunity to sample and learn about a variety of craft beer styles from across the country. Eighty-nine craft breweries from North America offer more than 40 styles of handcrafted beers to 85,000 beer lovers during the five-day event; two taps are dedicated to gluten-free beer, and a tap is reserved for the Oregon Brew Crew Collaboration project. Another 15 beers will be served by New Zealand and Dutch breweries in the International Beer Garden.

The festival’s focus is craft beer, but there's more than sampling involved. The event also features live music, beer-related vendors, displays, homebrewing demonstrations, and an assortment of food vendors. The Crater Lake Root Beer Garden offers complimentary handcrafted root beer for minors and designated drivers. Minors are welcome at the festival when accompanied by a parent.


The Oregon Brewers Festival was founded in 1988 as an opportunity to expose the public to microbrews at a time when the craft brewing industry was just getting off the ground. Today, Portland has more breweries than any other city in the world, and the Portland metropolitan area is the largest craft brewing market in the US. A recently completed study estimated the economic impact of the 2014 OBF at $32.5 million for the local economy.
FUN FESTIVAL FACTS: